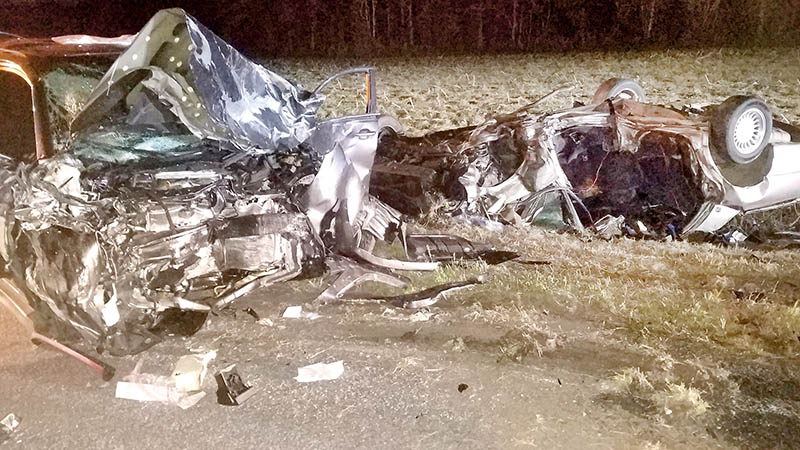 A passenger in the overturned vehicle shown here was killed early Saturday morning on Nowell Farm Road in Bertie County. The driver of that vehicle was injured, as were the driver and passenger of the vehicle at left. | Photo by Milton Felton – Colerain Fire Dept.

TRAP – An early morning accident near here Saturday claimed the life of a Colerain man and sent three others to the hospital.

Larry Grandberry, 42, was pronounced dead at the scene of a two vehicle crash that occurred on Nowell Farm Road, approximately seven-tenths of one mile from the intersection of Morris Ford Road near the community of Trap.

Reid’s report showed that Perry’s vehicle was traveling west on Nowell Farm Road at around 3:35 a.m. when it ran off the road to the right.

“At that time, the driver overcorrected, causing the vehicle to skid sideways, left of center, where it was t-boned in the passenger’s side by a vehicle traveling east at that exact moment,” Reid said.

That eastbound vehicle, a Toyota passenger car, was driven by Willie Robbins, 54, of Colerain. He had one front seat passenger – 48-year-old Frances Bazemore, also of Colerain.

Following impact, the Mercury continued off the roadway to the left, where it struck a ditch and overturned along the edge of a farm field. Meanwhile, the Toyota came to rest in the roadway.

Reid said neither the driver nor the passenger in the Mercury were wearing their seat belts and were trapped inside the vehicle. He added that Bazemore was also unrestrained and was trapped.

Reid said the medical condition of the three survivors is unknown.

“I’ve been yet unable to talk with the driver of the Mercury (Perry),” Reid said. “Until that conversation takes place, the cause of this accident remains under investigation and charges are pending.”

The fatality was the third of 2017 in the Highway Patrol’s Troop A – District II area (Bertie, Gates and Hertford counties). It was the first fatal crash of the year in Bertie County.