Lt. Col. Simons was born in Toronto, Ontario, Canada on January 5, 1933. He is the son of the late Dr. John David Simons, Sr. and the late Linnie Maude Fuller Simons.  At the time of Lt. Col. Simons birth, his father, Dr. Simons, was serving on the staff of McMaster University and was the Pastor of Indian Roads Baptist Church in Toronto, Canada. The family moved to Ft. Worth, Texas, where Lt. Col. Simons graduated from Polytechnic High School in 1951. He then attended Texas Christian University (TCU), in Fort Worth, TX, and graduated in 1955 with a B.S. degree in Education.  Lt. Col. Simons was actively involved in ROTC throughout both high school and his days at TCU.  His desire to serve his country led him to join the U.S. Army. He was commissioned as a 2nd Lieutenant in the U.S. Army upon his graduation from TCU. 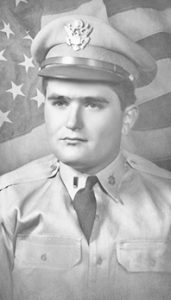 He attended The United States Army Command and General Staff College in Fort Leavenworth, KS, which was a highlight of his 27-year military career. Lt. Col. Simons was proud of his military service while serving in Germany with the 3rd Howitzer Battalion – 28th Artillery and in Vietnam with the 1st Infantry Division. His military service overseas included duty assignments in Germany, Korea and two tours of Vietnam. His numerous stateside assignments included – Fort Eustis, VA, Fort Leavenworth, KS, Camp Leroy Johnson, LA, Fort Shafter, HI, Fort Hood, TX., and the Pentagon, Washington, D.C. He also served on the Inspector General staff of the Defense Logistics Agency at Cameron Station, VA. Lt. Col. Simons was awarded the following service medals, among others, for his service in the U.S. Army – Legion of Merit, Bronze Star, Air Medal, Vietnam Service, Meritorious Unit Commendation and Korea Defense. He was a life member of The Military Officer’s Association of America and a member of The American Legion Post 102 of Ahoskie, NC.

Lt. Col. Simons was a longtime resident of Ahoskie, NC (Hertford County), moving there in 1982 after his 27 years in the U.S. Army. Hertford and Bertie counties were home to his late father’s family. He was subsequently employed at the Georgia Pacific Chemical Plant in Conway, NC, as the Transportation Supervisor. He was active in the Men’s Radio Bible Class of the First Baptist Church of Ahoskie, NC, where he frequently presented the Sunday morning devotionals. He served as a council member on The Ahoskie Town Council and ran for Mayor of Ahoskie in 1995.

Lt. Col. Simons was preceded in death by his father, mother, an older brother and infant daughter, Nancy Ruth Simons.

A memorial service to celebrate the life of Lt. Col. Simons will be held at The First Baptist Church of Ahoskie on Saturday, April 1, 2017 at 11 am with Rev Anita Thompson officiating.

The family will receive friends at any time at the home and wishes to express their deepest gratitude to the wonderful caregivers and staff at Three Rivers Nursing Home in Windsor, NC.

In lieu of flowers, memorial contributions may be made to either the Parkinson’s Foundation (PDF.org) or the Michael J. Fox Foundation (michaeljfox.org).

Garrett-Sykes Funeral Service is handling the arrangements for the Simons family and online condolences can be directed to the family by visiting www.garrettsykesfs.com.