WINDSOR – Nine runs, all scored with two outs, proved too much for Bertie to overcome here Friday night, and the Falcons failed to win back-to-back conference games as they fell to Elizabeth City Northeastern, 11-5.

Scoop Hoggard drove in three runs to lead the Falcon attack, going 2-for-4 at the plate.  Teammate Alden Cottle also had two hits for Bertie. Reed Haskett went 3-for-3 with a double and three RBIs to lead the Eagles.

Isom Collins drew a two-out walk in the bottom of the second inning, stole second, and scored on Hoggard’s base hit for a 1-0 Bertie lead.  The next batter, Trenton White reached on an error as Hoggard scored and White would come home on a base hit by Cottle.  Bertie led it 3-0 after two innings. 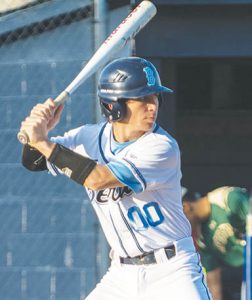 Bertie’s Scoop Hoggard drove in three runs Friday night, but Northeastern came from behind to trip up the Falcons with five late runs to defeat the home team, 11-5. | Photo by Angie Todd

Northeastern got on the board with a run in the top of the third, then exploded for five big runs – all with two outs – in the top of the fourth to lead it 6-3 after four.   The damage continued for the Falcons as four more Eagles runs crossed the plate in the top of the fifth and Bertie suddenly saw themselves staring up from a 10-3 hole after five innings.

Jared Speight got a two-out base hit – Bertie’s first in three innings – in the bottom of the sixth followed by James Brooks drawing a walk to get two runners aboard.  After Chris Pierce walked to load the bases, Hoggard ripped a solid shot to right field scoring Speight and Brooks, but Pierce was thrown out trying to stretch Hoggard’s hit into two bases, killing the rally and leaving the Falcons down by five at 10-5.

Northeastern collected one more garbage run that made it a six-run victory for the visitors.  Four Bertie errors contributed to the Falcons’ demise.

“We’ve got to cut down on our errors,” said frustrated Falcons coach Bobby Harmon.  “We’ve got a young team with a lot of talent and a lot of ability, but one or two bad plays can kill you.”

Bertie (1-8, 1-3, NCC) is on the road all this week.  First, they played at Gates County Monday night in a game not completed by press time.  Thursday they head to Farmville Central before wrapping up the week in Kill Devil Hills against First Flight.