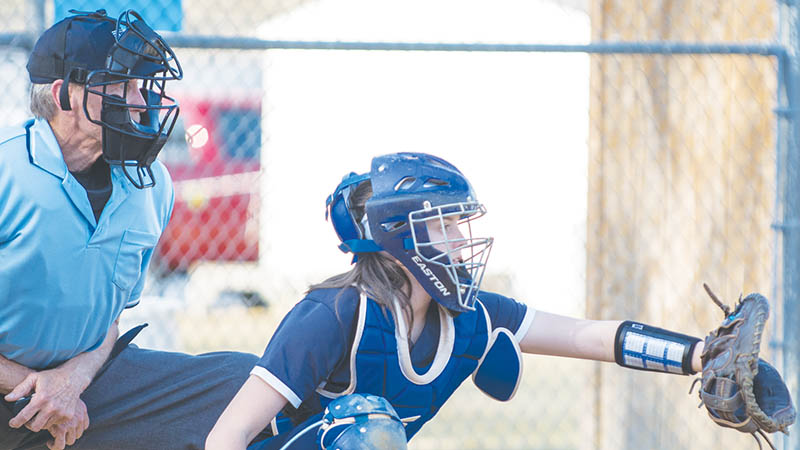 Bertie High’s Stephanie Castelloe (right) gets in position for a pitch in front of the umpire in Friday’s softball game with Northeastern. The Lady Falcons won 3-2 with a late run in the seventh inning for their fifth win of the season. | Photo by Angie Todd

“It was an intense, but fun, game,” said veteran Bertie coach Jackie Copeland. “We had to play hard all the way to the seventh inning to pick up this win.”

In the bottom of the seventh, Bertie loaded the bases with no outs.  Cydney Johnson then smacked a pitch between third base and shortstop to score Megan Williams with the game-winner.

Williams paced Bertie with three hits while Jessi Mizelle and Shanidra Outlaw had two hits apiece.  Alyssa Byrum got the win for the Falcons in the circle.

Thursday, Currituck County took a slim 1-0 win over Bertie, giving the Falcons its only blemish on the week and temporarily putting the Lady Knights alone in first place in the NCC.

Sandwiched between that loss was another Falcon win on Monday as Bertie traveled to Pasquotank to notch their first win of the week, 14-3, over the Lady Panthers in five innings.

Freshman Lindsey Dickens was four-for-four and scored a pair of runs. Bri Forehand got the win with three runs (all earned) on three hits with four walks and six strikeouts.  Outlaw, Williams, Byrum, Sydney Cowan, and Stephanie Castelloe also had hits for Bertie.

“Once Bri settled down, she pitched a good game for us,” said Copeland. “We hit well in this game and played good defense.  Players who came off the bench played hard and had positive attitudes.  Our non-starters are just as important to the team as those in the field.”

Bertie upped its overall record to 5-2 and stand at 3-1 in the Northeastern Coastal Conference, tied for first with Currituck.  After Monday’s game with Gates County the Falcons will host First Flight at 4:30 on Friday.