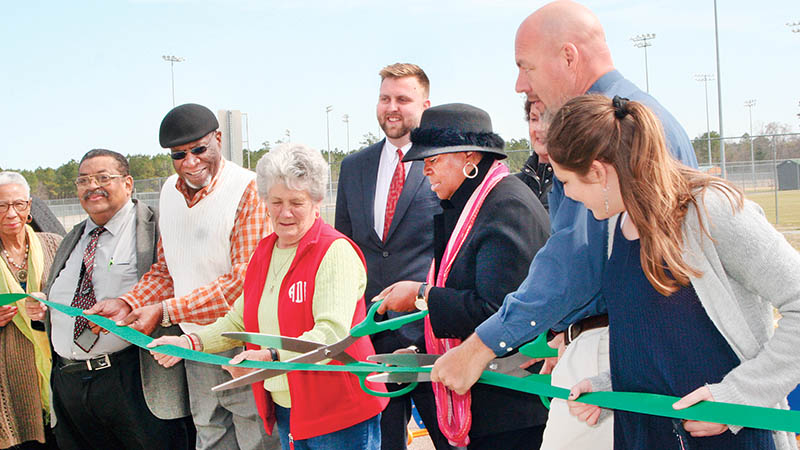 Northampton County officials cut the ceremonial ribbon to formally open the playground at the county’s Cultural and Wellness Center in Jackson on Wednesday. The playground was built with funds provided by Trillium Health Resources. | Staff Photos by Holly Taylor

JACKSON – On a bright sunny day, the sounds of kids laughing and shouting filled the air.

These children were having fun playing outside together on the new inclusive playground at the Cultural and Wellness Center in Jackson. The playground, sponsored by Trillium Health Resources, is designed so that kids of all ages and abilities have safe and fun equipment to play on.

The playground includes a rocking boat, quad-seater seesaw, jungle climber with adaptive seat and entranceway, adaptive swings, rock climber dome, and workout equipment. There is also a Liberty Swing for children and adults who use wheelchairs. The variety of playground accommodations is meant to make it easier for all children to play together outside.

All of the equipment is situated on a safe padded surface. The recreational area is spaced out so that children have plenty of room to play and interact with each other without feeling crowded. It is accessible from a gravel parking lot.

A ribbon cutting ceremony was held on March 22 to celebrate the new playground. 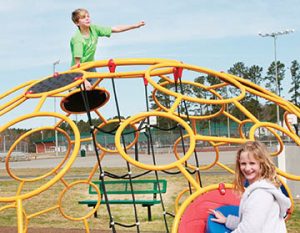 The new playground at the Cultural and Wellness Center is a “hit” as apparent by these children shown enjoying the jungle gym.

Northampton County Commissioner Fannie Greene, who spoke at the event, was very appreciative of the work Trillium and the county did to get the playground open for the public. She praised the idea of an inclusive playground and its importance in the community.

“It’s for everyone,” she said.

She concluded her remarks with the hope that children will come to use the playground, stay active, and have fun.

Northampton Recreation Director James Roberts, who also spoke before the crowd, shared a story about how kids were so eager to try out the new equipment that they kept coming to the Wellness Center and attempted to play before the project was even completed. Now that the playground is open, everyone is invited to check it out.

“It’s the first public playground of its kind in Northampton,” he said.

County Commissioners Robert Carter and Chester Deloatch were also in attendance at the ribbon cutting ceremony as well as former commissioner Virginia Spruill.

Funding for the project came from the “Play Together Construction Grant for Accessible Playgrounds.” Towns and counties across eastern North Carolina applied for these grants to improve existing playgrounds or to build new ones. 30 locations received grants, including Northampton. Trillium provided $300,000 to Northampton County’s recreation department for this project.

Trillium Health Resources is a leading specialty care manager (LME/MCO) for individuals with substance use, mental illness and intellectual/ developmental disabilities in 24 counties in eastern North Carolina. Trillium’s mission is to transform the lives of people in need by providing them with ready access to quality care.

CEO of Trillium, Leza Wainwright said via press release: “Trillium is so excited to officially open the playground in Jackson and continue making a positive impact on the community. With these new updates, children with disabilities can better enjoy play time with their peers, and family members with disabilities can participate in outside play together. We strive to strengthen the bonds within the community, and this park helps eliminate the stigma of disabilities.”

The Cultural and Wellness Center is located at 9536 Hwy 305 in Jackson. All ages are invited to come and enjoy the new playground.