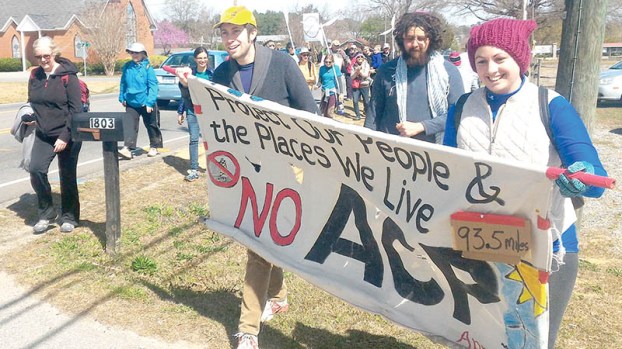 A portion of those participating in a two-week walk in opposition to plans to build the Atlantic Coast Pipeline are shown here on March 18 where the event ended in Hamlet. | Contributed Photo

HAMLET – More than 50 people attended a rally at the Smith Energy Complex here March 18, concluding an anti-pipeline, pro-clean energy walk from the Virginia border that stretched over two weeks and 200 miles.

Walkers from the NC Alliance To Protect Our People And The Places We Live (Stop The Pipeline) ended their journey by vowing to halt the Atlantic Coast Pipeline from being built and calling on Governor Roy Cooper and other state leaders to take steps to protect North Carolina’s electricity ratepayers from wasteful spending by Duke Energy.

The proposed pipeline, a joint venture of Duke Energy and Dominion Resources, could carry methane gas from West Virginia to North Carolina. The walk to oppose it began March 4 in Northampton County and ended March 18 at the terminus of the pipeline’s proposed spur to Hamlet.

Along the way the “water protectors”, not protesters, joined with local opponents in impacted counties to educate the public through a rolling series of educational events, rallies, and community walks. More than seven events were held and over 300 people collectively participated throughout the two weeks.

Marvin Winstead, a leader in Nash County Stop The Pipeline, objected to being strong armed by monopoly utility Duke Energy. Winstead told gathered water protectors, “My farm will be split in half by this if it gets built. It will run just a rock’s throw from my bedroom window. I don’t feel safe. And because I’ll never agree to it, they say they’re going to drag me into court. This is abuse of eminent domain laws. Eminent domain is supposed to about the public good, but this is only for their private gain.”

The proposed pipeline, according to those in opposition, is part of a massive industry build-out of fracked gas infrastructure that would lock North Carolina into the harmful and dangerous price-volatile fuel for decades to come. They say that Duke Energy has publicly stated their intention for ratepayers to foot the bill, while independent studies have shown this pipeline is redundant and unnecessary.

If built, the proposed $5.5 billion project would cross every major watershed, cut through forests and wetlands, destroy family farms like Winstead’s, and allegedly pose risks to health and safety for communities along the way, while also contributing to rising sea levels and more extreme weather events due to methane emissions.

Greg Yost, a high school math teacher from western North Carolina, traveled many hours to take part in the rally.

“It’s not surprising to see so many people here from across the state,” Yost said at the event-ending rally on March 18. “The Atlantic Coast Pipeline is an issue for all 100 of North Carolina’s counties, not just the eight they propose to run it through. If they build this, my family–really everyone’s family–would be stuck paying billions for the pipe, the gas plants, the increasingly expensive fuel, and the climate change that they create.”

Organizers will make teach-in materials publicly available for all walk participants and the public. A series of mass teach-ins across the state about the pipeline will begin later this month.