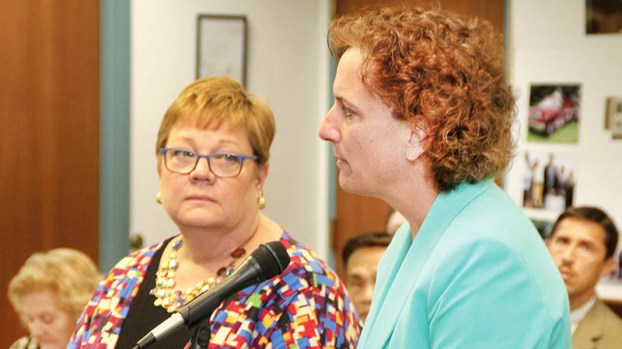 Alexis Schauss (right) of the NC Department of Public Instruction was joined by Sharon Edmundson (left), representing the NC Local Government Commission, at Monday’s meeting of the Bertie County Board of Commissioners where the topic of discussion centered on the Bertie School District’s ongoing financial crisis. | Staff Photo by Gene Motley

WINDSOR – It could the greatest challenge Bertie County Schools have faced, and they’ve got a little more than 100 days to get it done.

On Monday, representatives from both the NC Department of Public Instruction and the NC Local Government Commission came before the Bertie County Commissioners here, along with several Bertie School Board members and Superintendent Dr. Steve Hill, to discuss the district’s fiscal crisis.

Bertie County Schools (BCS) first came before the Commissioners last fall alerting them to a budget shortfall they were facing that had been caused by excessive spending. When BCS’ latest (2016) audit was finally made available earlier this year, it revealed that what may have been first considered a leak had now become a deluge.

It shows the prior year’s General Fund balance for the system is a negative number: $704,955 in the red; clearly a violation of state statutes which require school systems to have a balanced budget.

Now, it’s been further revealed that the current year’s operating budget is reporting a deficit of $838,379. Because of the shortfall, the school board has been using restricted food service proprietary funds to meet its current payroll, a further violation of the law.

One suggested solution for repayment of the food service funds would be an advance from the county, which the Commissioners would have to approve, of $925,904; and it would have to be done before the end of the fiscal year: June 30, 2017.

Windsor attorney Lloyd C. Smith, Jr., who is also legal counsel to the Bertie County Commissioners, told the Board on Monday they are in no way, by North Carolina law, obligated to provide a “bail-out” for the schools. Smith’s remarks were backed up by the two representatives from Raleigh.

“This carries a larger economic effect on this county than either of the floods (from the Sept. & Oct. 2016 storms) had on downtown Windsor,” said Smith.

Smith has recommended the superintendent and the schools’ Finance Officer meet weekly with County Manager Scott Sauer, and Bertie Finance Officer William Roberson, to provide expenditure reports and salary data. He also says the school system should make a claim on their surety bonds – bonds taken out to protect the school board against losses resulting from the schools’ former finance officer’s failure to meet his obligation to keep a balanced budget which is allegedly what led to the shortfall.

“On several occasions we have inquired about the surety bond being called for the past two audit year cycles, and there’s been no response from the Board of Education,” Smith said. “We’ve witnessed repeated audit findings of material weaknesses in area of general ledger accounts not reconciled and management decisions made by the school board relying on inaccurate financial reporting.”

“That’s a source of money, and one of the reasons people are bonded,” noted Smith. “Whether its gross negligence, misconduct, or criminal conduct, you’d be able to get that money back.”

Smith said he did not believe there was a deliberate attempt to deceive either the commissioners or the school board.

“The (school) board has been misled by bad numbers,” Smith reasoned. “And it needs to be straightened out.”

Alexis Schauss, Director School Business for the state’s Department of Public Instruction, admitted there have been other school districts in the state with financial difficulties similar to Bertie’s. However, finding a financial solution is not so easy.

“DPI doesn’t have funding,” she stated, “it comes from the General Assembly and Bertie also receives supplemental federal grants; but those are not for base operating funding.”

Schauss said her office is continuing to monitor Bertie County Schools from Raleigh.

“It’s not unusual for a school district to have a material weakness, it does happen,” she said. “School districts do use fund balance for various operating, or one-time expenditures. That is not something we find a violation. The state does not monitor the management of school districts, that’s the local board’s responsibility. We are just insuring they are not in violation.”

Schauss said she felt Bertie schools was addressing their issues, putting corrective action in place to move the district toward financial solvency.

“The first step is acknowledging there is an issue,” she noted. “Then, the severity of the issue; and now comes reduction in force, cost reductions, and looking at places of revenue that were not tapped before. Going forward, you now need a plan to implement for the next five or more years to resolve these issues and make it a long-term solid foundation.”

When pressed about a financial solution, Schauss said DPI has no authority to forgive debts. She did say there could be accommodations and support as the district endures this such that the harm to students is minimized.

Sharon Edmundson with both the state Treasurer’s office and the Local Government Commission, noted there were caveats should the school board opt for the surety bonds.

“Some insurers require that there actually be criminal charges filed before they will pay on a bond,” Edmundson said. “Some do not.”

Edmundson said the late filing of the audit led to some repeat missteps by the school board in 2016 that might have been caught in 2015 had a stricter timeline been followed.

“I will give the school board credit,” she said. “They’ve followed a lot of steps I would recommend: they’ve put new people in place, they’ve hired a new auditor, and the books have been caught up – if they haven’t been already.”

“As long as the fund balance is within a relatively acceptable level we assume the school board knows what it’s doing when it spends its fund balance,” she acknowledged. “Where we get upset is when that funds balance is being used by overspending your budget.”

Edmundson said the relationship for schools’ funding is different than for municipalities because they rely on the county, state, and federal government.

“How much fund balance a school system maintains is something that needs to be negotiated between the schools and the county,” she said. “It (schools) depends on that relationship and how that money gets used.”

Schauss said she did not know if there was a penalty if the food service funds – which are federal, and restricted – that were borrowed, were not returned.

“It’s a bit complicated,” she said, “because the employees are locally-paid employees, but the meals are reimbursed by USDA.”

Schauss said she was not aware of any waivers that could be made relating to financial management issues.

The commissioners were unified in wanting the county to maintain a healthy fund balance, and want answers about the discrepancies that the audit report reveals.

“We need some way of getting the answers,” said Commissioner Ron Wesson. “(We need) the where, the why, the who. How can we know going forward we’re doing the right thing when we don’t seem to even know what we’ve done. That’s why I need that level of detail.”

The commissioners also wondered if unspent funds allocated to the school district, but since returned to the state could be recouped.

“Those funds have reverted to the state – as they do every year – and at this point they’ve been re-appropriated and there’s not an ability to re-claim them,” Schauss said. “At DPI we are not able to provide that kind of assistance, but there are things we will be looking at because they affect state and federal funds.”

“The budget would not have shown up as overextended had it been properly amended,” said Edmundson. “The areas here that were overspent are areas where the (school’s) budget was not amended.”

As for a more detailed, or forensic, audit, Schauss said she could refer the matter to the State Auditor’s Office in Raleigh; but warned the Commissioners that their involvement would only be to trace state or federal money, not local.

“It would not be a full-blow audit,” she maintained. “They would only look at specific areas.”

Edmundson said while DPI and the LGC know that with the deficit the school system is operating in violation of the law, there is no quick fix.

Schauss said a re-payment plan, once submitted, would have to be approved by the State Board of Education.

“It would have to be a reasonable plan that could be accomplished within a reasonable period of time,” Schauss stressed. “In this situation it is local funds; and the school district’s plan would have to eat away at the fund balance deficit each year, so there isn’t a one-time burden.”

Sauer further added the NC Local Government Commission has no control, oversight or authority with regard to local school fiscal management and that the Bertie County Commissioners have full authority to request and receive financial reports from the school system.

However, he noted the commissioners are under no obligation to provide additional funding and places no duty on themselves or the county to fund a deficit incurred by the local school board through failure of the school system to comply with state law or to provide moneys lost through misapplication by a bonded officer.

As for Monday’s meeting, in which several school board members were present: Chairman Bobby Occena, Vice-Chair Barry McGlone, along with Jo Davis Johnson and Emma Johnson, and Superintendent Hill, they did not comment and stated they would meet back with the county commissioners at their April meeting.

Meanwhile, the deficit remains, and the clock ticks on toward the June 30 deadline.

WINDSOR – Three suspects are in custody after a two-county high-speed chase ended without incident on US-17 east of Windsor... read more