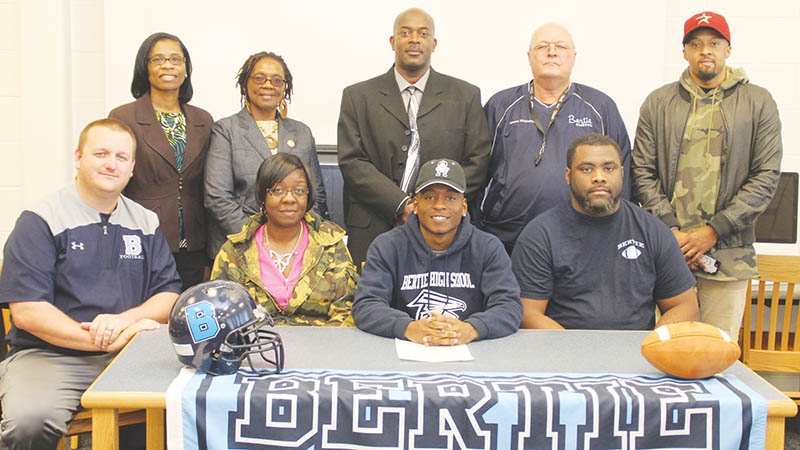 WINDSOR – It’s not the same as your birthday on Christmas, but Jacori Vaughan will gladly swap with St. Patrick anytime.

The former Bertie High receiver wanted to sign to play football on his birthday – March 17 – so he bypassed National Signing Day to do the deed on a day that would have special significance.

Further, the Lewiston native has signed an academic scholarship with Guilford College, a member of the Old Dominion Athletic Conference. Because the Quakers are an NCAA Division III member, they don’t offer athletic scholarships. But head coach Chris Rusiewicz has invited the 5’8” 160-pounder to come out for the team.

Vaughan played in the Falcons’ first three games in 2016   before suffering an injury in the Bertie game with Southwest Edgecombe.   He would not return to the gridiron until the regular-season finale at Edenton Holmes. He did play in the 2A first-round playoff game in Vinegar Hill against South Columbus where he had one catch for 22 yards. Despite competing in just six games total his senior year he made 19 grabs for 192 yards giving him an impressive average of 14.8 on the season and a whopping 32 yards-per-game catch average.

Still, with so many absences from the game, some of the schools that had him on their radar after junior year suddenly had backed away. Vaughan then thought he might join former Bertie teammates Corey Cherry and Greg Williams at Elizabeth City State – who, along with St. Andrew’s and Winston-Salem State tried to recruit him. But then came the Guilford invite; athletic money or not.

“I was playing good before I got hurt,” Vaughan says. “So playing in just one conference game when we played six had to hurt even more.”

Since he’ll have to balance the books as well as the sports when he makes it to college, Vaughan says he’s already preparing for ways to budget his time. He hopes to major in Sports Medicine and says he’d like to become an athletic trainer one day.

“Kinda like Terrance,” he noted; an homage to Falcons trainer Terrance White, who he considers an inspiration.

“There’re really giving him a chance,” said Bertie coach Grantley Mizelle. “Everybody looks at him and says he’s undersized, he’s too short; but he’s never let that get to him. Obviously he’s kept working not just at football, but also at his academics; and now that’s allowing him to continue his football career.”

“He loves football,” says Vaughan’s mother, Tamakio. “But he’s got a little head on him and he knows those grades come first and he’s got to keep those up.”

Vaughan says he wants to return to Bertie one day, maybe even to assist Mizelle, or the other Falcon football coaches, and give something back to the program.

“I miss football right now,” he maintains, “I was just going to come back and coach the slot receivers, because that was my position.”

With a wink and a grin, Vaughan says he might have signed earlier, but the Media Center was full of other of his school-mates who were signing; so he chose the best possible day – and date to get it done.

“I get a bonus: a birthday and a signing on St. Patrick’s Day”, he said.

And there’s no ‘Luck o’ the Irish’ involved in it.