A celebration of her life of faith and joy will be held at 2 p.m. on Saturday, March 25, at Colerain Baptist Church in Colerain officiated by the Revs. Gary Saffell and Gene Williams. A private family committal will be held at a later date. 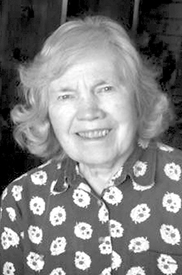 Ruth Frye Harrison was born January 24, 1932, to the late Jesse and Ruth Jackson Frye and grew up in Boston, Massachusetts. She was a proud veteran of the United States Air Force and served as an international flight attendant. Mrs. Harrison was a longtime member of Colerain Baptist Church before moving to Stokes and a member of Parker’s Chapel Free Will Baptist Church in Greenville.

She was preceded in death by her brothers and sisters, Elisabeth Harrison, Louise Guild, Margaret Frye, William Frye and Jesse Frye.

She is survived by her husband of 57 years, William L. Harrison of Stokes; her brother, David Frye and his wife Shirley of Margate, Kent, England; her brothers in law and her sister in law, Elton Harrison, Glennie Lawrence, and Willie “Buster” Harrison; her daughters, Deborah Vanderplas of Largo, Florida, Rebecca Kelly of Westland, Michigan, and Esther Ingalls of Stokes; Deborah’s husband Steven and their children Samuel and his wife Meredith, Timothy, Sarah, Abigail, Joseph, Daniel and Esther; Samuel and Meredith’s children Jackson, Theodore, Clara and William; Rebecca’s husband Tracy and their children Lauren, Christina, Cassandra, Jordan, Jon, Tyler and Mallory; Esther’s husband Terry and their children Jackson and Kristin; and many cousins, nieces, nephews and their children and grandchildren.

In lieu of flowers, the family suggests donations be made to the Service League of Greenville Inpatient Hospice.