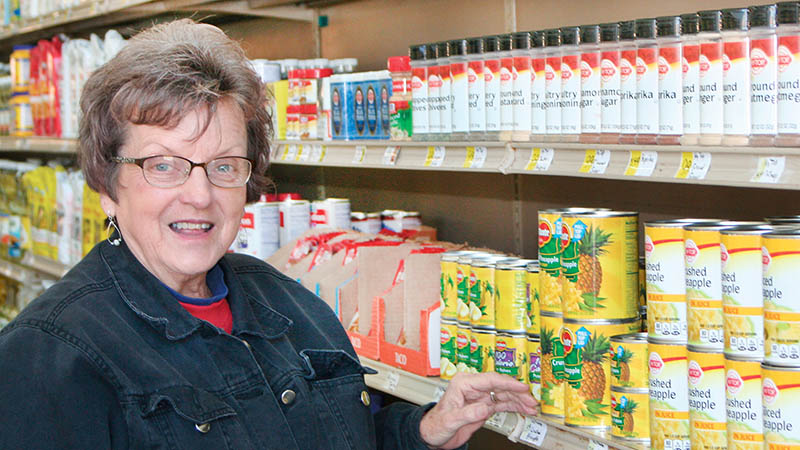 Anne Best, the mother of Jackson Grocery owners Chris and Jeff Best, stands beside one of the fully stocked shelves inside the new business located at 125 West Jefferson Street in the heart of the downtown business district. | Staff Photos by Holly Taylor

JACKSON – The town of Jackson has a grocery store again, filling a void for the small community since the previous supermarket shut down a few years ago.

Jackson Grocery, which opened for business at the end of January, offers all the staples of any other grocery store. Shelves are lined with all the necessities and a variety of options to choose from. Each section is neatly labeled and easy to find.

They have fresh produce and seafood. Fresh meat is cut by a butcher in the store. Beer and wine will be available to purchase soon as well. 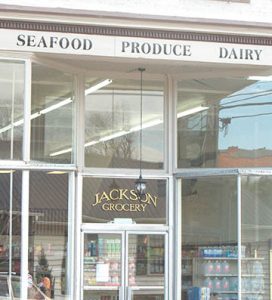 Housed in a building constructed in the early part of the 20th century, the Jackson Grocery storefront has been redecorated to create an old-fashioned look.

He opened the grocery with his brother Jeff because they wanted to give back to the community and because they knew there was a need in the area for it. Jeff has previous grocery store experience while Chris’s background is in retail.

Chris says that it took a lot of work to turn the building, located at 125 West Jefferson Street, into a functioning grocery store. They began work in June of 2016. Along with getting the shelves and freezers in the store installed, they also repurposed the space for a stock room as well as for produce and meat prep rooms.

The building itself is “the most prominent commercial building in town,” according to Jackson Town Council member Jim Gossip.

The three-story building was originally Bawer’s department store when it was constructed around the first quarter of the twentieth century. Over the years, the building has housed many different businesses, including Leggett’s Department Store and an antique shop, but this is the first time it’s been used as a grocery store.

Today, the historic building’s storefront has been redecorated to create a turn of the century look and draw more attention to the store. The old-fashioned displays in the wide glass windows provide a look inside.

“It fits in with the motif of downtown Jackson,” Gossip says.

Gossip went on to stress the importance of opening a grocery store in Jackson, citing lack of public transportation as one of the reasons residents need a close source of food.

Judy Collier of the Northampton County Chamber of Commerce says Jackson Grocery “will be a huge asset to the community.” She was excited to see the business open up in Jackson.

The grocery store was recently approved to accept EBT cards, and plans are now in the works to accept WIC very soon as well.