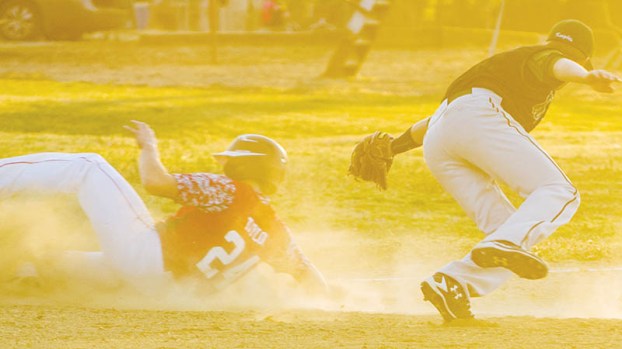 Northeast Academy’s Kevin Taylor (left) slides into third base ahead of the tag in a recent TIC baseball game. Northeast fell to Pungo Christian 14-3 on Thursday, keeping the Eagles winless in league play. | Photo by Angie Todd

LASKER – Mother Nature doesn’t realize that it is baseball season.

On a non-spring like day with a temperature of 44 and a wind chill in the 30’s at game time, Pungo Christian Academy made the trip from Belhaven to Lasker well worth it. The Raiders blew open a close game in the latter innings and came away with a 14-3 victory over the host Eagles of Northeast Academy.

The game started inauspiciously for the Eagles. Nate Van Staldheim led off for the Raiders and popped up to second base. The wind managed to do tricks with the ball and Van Staldheim reached base as the ball fell to the ground between the infielders.

On the hill, Simmons retired the first seven Eagle batters he faced. The Eagles’ Austin Bradley got the first hit off Simmons with one out in the bottom of the third inning. He later came around to score on a double by Ryan Rowe. The Eagles trailed 3-1 after three innings.

The Eagles mounted a short lived comeback in the bottom of the fifth. Chandler Howell led off the inning with a single. A walk to Bradley and a single by McKinley Jordan loaded the bases. Rowe delivered a single scoring Luke Baker who pinch ran for Howell. Bradley then scored on a sacrifice fly to right field by Kevin Taylor. Northeast only trailed by four, 7-3, but that would end the scoring for the Eagles. The Raiders scored two more runs in the sixth and five more runs in the seventh to claim the 14-3 victory.

With the victory, Pungo moves to 1-1 in the Tarheel Independent Conference and a 2-2 overall mark. The Raiders will host the Rams from Ridgecroft on Monday.

The Eagles fall to 0-2 in conference play and 1-2 overall. Northeast travels to Lawrence Academy on Monday and will be seeking their first conference win.