HOLLISTER – In the sport of Kyokushin karate, Warren County native Christian Buffaloe is among the best the United States has to offer.

Three years from now, he could very well be the best in the whole world.

Buffaloe, who, along with his father, Kenny, teaches karate at Chowan University’s Jenkins Center in Murfreesboro after 17 years of teaching in Ahoskie, recently won the Japan-sponsored Kyokushin Karate AAOC Championships in New York City in the 17-year-old Teen Elite category.

“That tournament served as a qualifying event for entry in the 2017 Kyokushin Karate International Teen Elite Championships on April 15 in Tokyo, Japan,” said Kenny Buffaloe, who is also his son’s trainer. “This is the top full contact martial arts championship in the world and only the best competitors from each continent are allowed to enter.” 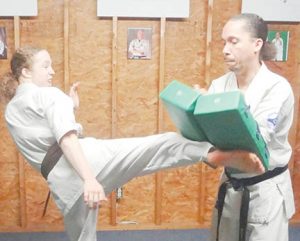 The younger Buffaloe was tested at the Kyokushin Karate headquarters school in New York City by Shihan Katsuhito Gorai, a top Kyokushin Karate instructor from Japan. After three grueling hours of testing on his techniques, power, and spirit, Christian was officially promoted to First Kyu (brown belt/black tip). At this level, a trainee must also show aptitude and ability to teach basic Kyokushin training classes to lower ranked students. Buffaloe does this with the weekly training classes on Thursdays at the Jenkins Center, passing on his knowledge and experience to area students.

“I have to mentally prepare myself to train him,” said his father. “Even when I have injuries – and sometimes I get those while training – I never let him see that. We spend two hours daily hardening ourselves in Kyokushin.”

“It’s not the time, it’s the quality of the training,” says Christian. “Two hours of intense training would be more beneficial than five hours mentally.”

“Focus, if you allow yourself to be scared, you’ll freeze up and you can’t perform as well as you normally would so I just stay focused and concentrate on what I have to do,” he said.

In Kyokushin style karate, the Kumite (fighting portion of the test) is the most important requirement, 70 percent of the test, which is always full-contact, consists of knockdown fighting against multiple opponents consecutively without a break.

By winning First Place at the New York tournament, Christian is now a major contender again for the world teen title.

Tokyo will be his last opportunity to compete as a youth competitor because he turn age 18 in November.

The elder Buffaloe is also excited that Kyokushin has finally been included in the 2020 Tokyo Olympics for the first time.

“We are very excited by the possibilities,” Buffaloe says, excitedly. “By competing at high level in the upcoming International (World) Championships, it may also open the door for Olympic participation later.

“It’s been a dream of Christian’s to compete in the Olympics since he was a young boy. Our Kyokushin Karate organization in Japan has been trying for over 40 years to get Kyokushin included into the Olympics and now it will finally become a reality,” he said.

Buffaloe says they are currently looking for sponsors as there will be a lot of media coverage in the next few weeks.

“If anyone who owns a business is interested in sponsoring us or to make a donation, please contact me at 252-589-4281,” he said. “Or they can send an email to: kyokarateka@aol.com .”