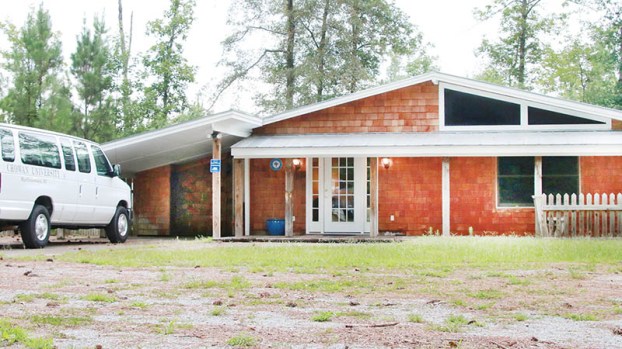 The Jenkins Retreat Center has been gifted to Chowan University by the Jenkins family. | Contributed Photo

As you turn off the main road onto the curved gravel drive, cell phone reception drops away and you see nothing but pine trees and wilderness. Those who persevere by winding their way further up and further in are rewarded with rest, peace, and a deep sense of renewal.

Alumni Joe Henry and Jenny Jenkins are no strangers to Chowan University, or to charitable giving. You could almost say that both run in the family. The Olivia Benthall Jenkins residence hall on campus is named for the Henry’s grandmother who attended the Chowan Baptist Female Institute (Chowan University). His uncles, Charles H. Jenkins and Herbert Jenkins, both served on the Board of Trustees as did his cousin, Herbert Jenkins, Jr. Joe Henry’s brother Wayland L. Jenkins, Jr. is a notable Chowan University supporter, establishing the Fine Arts Center that bears his name.

“My grandmother made sure to leave a portion of her estate to Chowan before she passed away in the 60s,” Joe Henry recalls. “And my brother Wayland has done all sorts of things.”

If there were a Jenkins family motto, it would certainly incorporate art, education, peace, and the area surrounding Hertford, Bertie, and Dare counties. They are deeply committed to fostering opportunities in this area, where opportunity is often somewhat lacking.

The gift of a parcel of land with a small cabin attached may not be the go-to for charitable giving. But Joe Henry and Jenny Jenkins knew exactly what they were offering to Chowan students, faculty, and staff with their gift. After all, the land was their home through their entire marriage – just shy of 50 years. Chowan was quick to recognize the opportunity at offer, to add a facet to University life previously uncaptured. Thus, the Jenkins Retreat and Conference Center came into being, in memory of Olivia Benthall Jenkins.

“We were surprised that what we had to give was accepted with such enthusiasm,” says Jenny. “It was wonderful for us, because we didn’t want it to just become some hunting lodge, and we didn’t want it parceled up and sold off.”

The land has been in the family for generations.

“Some of it goes back to a land grant from the King,” Jenny clarifies.

With no children of their own to inherit, the Jenkins endeavored to find another way to keep it in the “family.”

“It was important that it stay, and belong, and be used for some beautiful purpose,” says Jenny.

In an era of smartphones, high speed internet, and ubiquitous social media, it’s easy to lose sight of what it means to be unplugged. For college students, whose entire lives seem to be lived online, it’s also easy to lose sight of the value of face to face connection. With the addition of the Jenkins Retreat and Conference Center, more are going to have the chance to rediscover it for themselves.

In a short time, the property has already played host to several diverse groups. Alpha Chi Honor Society, Student Ministry Chaplains, the Development Office, and even Chowan Senior Staff have had the pleasure and the privilege of experiencing true retreat and renewal there. The couple loves that the property will continue to be used as a meeting place.

Jenny, who is an artist, also hopes that the retreat will serve as a source of inspiration.

“I hope it will be a place, too, for artists, musicians, and writers to spend some time and walk through the woods to be renewed and inspired,” she said.

The entire acreage is suffused with the happy, contented glow of good memories.

“Every time I drove up there it put a smile on my face,” Joe Henry agrees. “There are no bad memories there. We just wish those same happy memories, that same deep quiet and peace, for everyone who experiences it.”