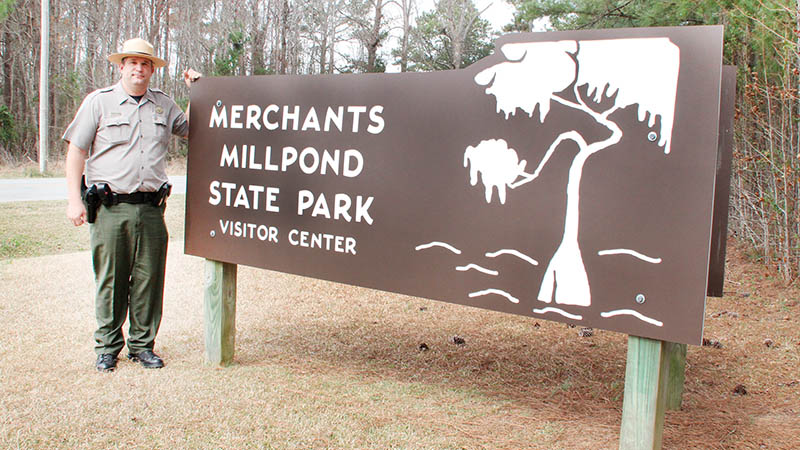 GATESVILLE – Steve Rogers said there were only a handful of places he would locate his young family should the opportunity arise.

Gates County was among those limited choices.

“We came up here and looked around before making up our minds that this was one of the places we would relocate,” Rogers said, referencing he and his wife, Hannah, and four-year-old son John Griffin.

“We had a small list of places that we would leave Pettigrew (State Park) for and Merchants Millpond was one on that list,” he added.

He said he and his wife loved the close proximity of the public schools in Gates County. They also fell in love with the county’s new public library.

“The library was a big selling point for us,” Rogers remarked

“The people here were so welcoming….that helped to make our decision to relocate much easier,” he continued.

Raised in Grifton, Rogers is a 1999 graduate of Wayne Community College with a degree in Park Ranger Technology.

With that education, Rogers landed a job with Wake County Parks for 10 years.

In 2009, Rogers joined North Carolina State Parks. He was assigned as a Ranger at Pettigrew State Park, located on Lake Phelps near Creswell. In 2015 he was promoted to Park Superintendent.

“I’m going from one water-based park to another,” Rogers observed,” but they are considerably different.”

He noted one major difference between the two is that Merchants Millpond has a larger number of annual visitors as compared to Pettigrew.

“There are a lot more camping opportunities here at Merchants,” Rogers said. “I’m looking forward to meeting that challenge.”

Since arriving in Gates County – although on a part-time basis as he still is the interim Superintendent at Pettigrew until his replacement is found there – Rogers likes what he sees.

“The people here are so warm and friendly,” he stressed.

At Merchants Millpond, Rogers will oversee a staff of six full-time employees as well as part-time seasonal workers.

He and his staff will be the “keepers and protectors” of one of Mother Nature’s most precious gems – a place where southern swamp and hardwood forest mingle, adorned with massive bald cypress trees, beech groves, Spanish moss and exotic wildlife.

“I’m coming from a 16,000 acre park where a lake averages four and one-half feet to an 800 acre pond that is basically a flooded woodland…..you can’t even begin to compare the two,” Rogers said in respectively describing Pettigrew and Merchants.

He also mentioned there were more trails and campground sites at Merchants Millpond, stressing that maintenance and upkeep are vital.

“It still amazes me to look at the numbers over the previous years and see the great number of people that visit Merchants Millpond State Park,” Rogers said. “Due to its location, Merchants Millpond draws from Virginia, North Carolina as well as other states. That helps to bring money into Gates County, so it’s a win-win situation for the park and local merchants.”

As Superintendent, it falls upon Rogers to not only lead, but to administer all the programs offered at the park as well as overseeing the maintenance aspect.

“Our job is to maintain what nature has provided here; and what is here is beautiful,” he stressed. “Environmental education is also a big component to what we do here. Those programs are not just related to school students, we offer them as well to the general public.”

He is also pleased that the Visitors Center at Merchants Millpond is a popular location for Gates County based clubs and organizations to conduct meetings and other functions.

“I’m thrilled to know that our Visitors Center is such a popular place,” Rogers stated. “It’s a great alternative use for this building.”

Rogers also feels comfortable knowing he has a highly trained and capable staff at Merchants Millpond.

“This staff has been here a while,” he observed. “There’s not much turnover in staff here; that tells me there’s good reasons why they stay here.”

At age 41 and less than 10 years into his career with NC Parks, Rogers has plenty of time left in his career to advance.

“It’s possible,” he remarked about the possibilities to relocate again. “But I didn’t come here with the aspiration of where I’m going next. When I took the job at Pettigrew, I really didn’t think I’d go anywhere else because my wife is from that area. We were happy there, but we’re going to be happy here in Gates County. We’re going to put down our roots here.”

So, with that in mind, welcome to Mr. Rogers’ new neighborhood.