LITTLETON – The annual Shaw University Day scheduled for 3 p.m. on Sunday, March 19 at Springfield Missionary Baptist Church in Littleton will feature the Rev. O. D. Sykes of Weldon as the keynote speaker.

The public, alumni and friends of Shaw University are invited to come and support this event.

The Weldon-Seaboard Shaw University Alumni Chapter established in 1935 is the oldest continuous functioning chapter in the State of North Carolina. 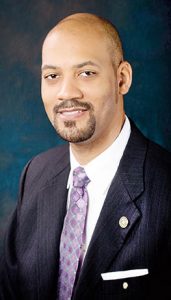 Rev. Sykes is the youngest of four children, born to the parents of Deacon Paul C. and Deaconess Bessie M. Sykes of Garysburg. He has two brothers, one sister, nine nieces and nephews, three great nephews and two great nieces.

Rev. Sykes is happily married to Kristy D. Sykes and they are parents of one daughter, Briana.

He is a graduate of Northampton County High School West in Gaston, and Saint Paul’s College in Lawrenceville, VA. Rev. Sykes is a member of Oak Grove Missionary Baptist Church in Garysburg where he was licensed to preach the Gospel under the Pastorate of the Rev. Joseph L. Battle. He was ordained through the Neuse River Missionary Baptist Association.

Rev. Sykes’ other affiliations include the General Baptist State Convention of North Carolina serving as the 3rd Vice President, a member of both the General Board and the Executive Committee, along with a position on the Women’s Baptist Home & Foreign Missionary Convention Auxiliary of GBSC. He is also affiliated with the Neuse River Missionary Baptist Association serving as 2nd Vice Moderator, Executive Board Member and Examination/Catechism Board Member. Additionally he is a member of the Reedy Creek Missionary Baptist Association serving as1st Vice Moderator, Examination/Catechism Board Member, and former Director of the Educational Institute