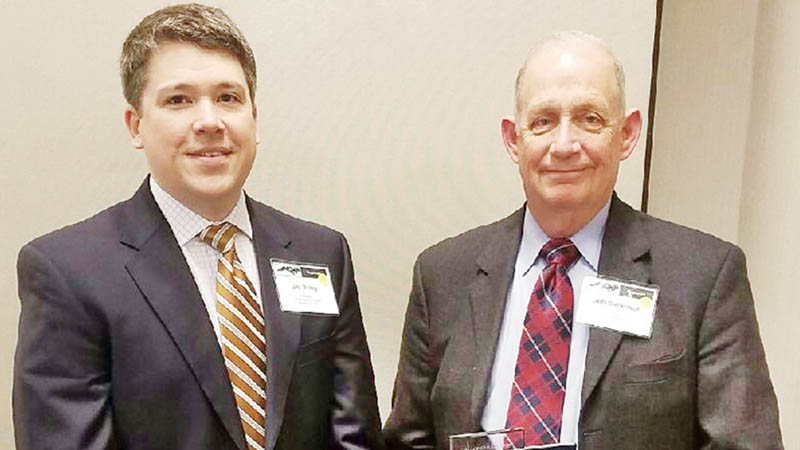 Vidant Duplin Hospital President, Jay Briley, nominated Sackrison for this prestigious honor. The award was bestowed on Sackrison by Joann Anderson, ACHE’s Regent for North Carolina and President/CEO of Southeastern Health in Lumberton.

The Senior-Level Healthcare Executive Regent’s Award recognizes ACHE members who are experienced in the field and have made significant contributions to the advancement of healthcare management excellence and the achievement of ACHE’s goals.

“Having received a Regent’s Award in Pennsylvania as an early professional, Jeff has been a great supporter of ACHE throughout his career. His encouragement of others, especially those new to healthcare, to engage and advance in ACHE is a testament to his commitment to ACHE and his vocation,” stated Anderson.

Members are evaluated on leadership ability; innovative and creative management; executive capability in developing their own organization and promoting its growth and stature in the community; contributions to the development of others in the healthcare profession; leadership in local, state or provincial hospital and health association activities; participation in civic/community activities and projects; participation in ACHE activities; and interest in assisting ACHE in achieving its objectives.

“I had no idea that I had been nominated, and was surprised to receive this award. I was honored, but more importantly humbled, to be nominated by another hospital president, and one of my colleagues,” commented Sackrison on what receiving this award means to him.

Sackrison has served as President of Vidant Bertie Hospital and Vidant Chowan Hospital since 2003. Prior to this, he served in multiple leadership roles in hospital systems in eastern Pennsylvania.

Sackrison received his Master’s in Business Administration from California Coast University and his Bachelor of Science in Nursing from East Stroudsburg University.