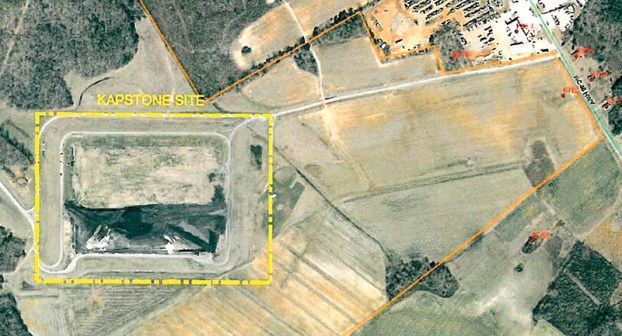 Coal ash sites are no stranger to N’hampton

JACKSON – VistaGreen is apparently not the first entity seeking to store coal ash in Northampton County.

According to research complied by the county’s Planning and Zoning Department, Northampton is currently the home of two such sites – one still active while another is allegedly no longer in operation.

“One of our commissioners was informed by a county citizen that there was at least one, coal ash storage area in the county,” said Northampton County Manager Kim Turner. “Our board of commissioners asked us to explore this in more detail and we learned there were actually two such storage areas in our county.”

Turner said the information shared by the citizen was explored by the county’s Planning and Zoning Department. That site, located approximately one mile southeast of the I 95 / NC 46 interchange and known as the Henry Long Site, is over 10 years-old.

According to Northampton Planning and Zoning Director William Flynn, this site was developed by the individual landowner without permission of the county.

“The applicant apparently prepared this project under some type of Coal Combustion Byproduct Reuse Plan. The plan was approved by the North Carolina Department of Environment and Natural Resources in 2004. To my knowledge, Northampton County officials were never notified of this project,” said Flynn in his report to Turner, a copy of which was shared on Monday with the commissioners during their regularly scheduled meeting.

It was not mentioned in Flynn’s report if the coal ash storage area at the Henry Long Site was lined or unlined.

In his report, Flynn said the site was initially brought to the county’s attention sometime in mid 2006.

“Notice of Violations were issued to the landowner at that time, yet it is believed he continued to dump coal ash on this site for some period thereafter. To my knowledge, the fill is closed and no dumping now occurs,” Flynn stated.

Flynn added that in 2007, an application was filed for a Special Use Permit with the county to be able to operate an industrial landfill on the remaining and adjoining 20.9 acres of land at the Long Site. The proposal went to the Northampton County Planning Board where it received a favorable recommendation and then on to the Northampton County Board of Commissioners where the application was denied.

The site that Turner said that county officials were unaware of is owned and operated by Kapstone Kraft Paper Corporation. That site is approximately one-half mile west of 6650 NC 46, Garysburg.

In his report, Lassiter noted that Knudson informed him that the site is lined and opened in late November of 1989. The contents of the landfill are coal ash, sludge from waste water, caustic lime and lime mud, and trace amounts of saw dust residue.

Knudson said the boilers at the Kapstone mill, located in Roanoke Rapids, use a mixture of about 50 percent coal and 50 percent saw dust.

The Kapstone landfill is permitted by the state and is inspected on an annual basis.

“This site has no permits from Northampton County and is considered a pre-existing, non-conforming use because it was established prior to the January 1, 1994 adoption of the (county’s) zoning ordinance,” Flynn stated in his report.

In January, VistaGreen, a Raleigh based company, applied for a Special Use Permit to use an 804 acre tract of land for the purpose of constructing, operating and maintaining two coal ash storage and recycling landfills.

That property, purchased in late 2015 by VistaGreen, is located southeast of NC 186 between Seaboard and Margarettsville. It is currently zoned A-R (Agricultural/Residential) and situated between High Bridge Road and Tower Road.

The proposed High Bridge Park facility would only accept CCR material, which is a byproduct of the coal combustion process. VistaGreen officials said the material would be stored within two landfills, each lined with a thick, durable membrane of high density polyethylene that will be placed on top of a two-foot layer of compacted clay soil. That barrier is designed to prevent any contaminants from migrating into groundwater. Several monitoring wells will also be located on the site.

After experiencing stiff opposition from county citizens, VistaGreen officials withdrew its Special Use Permit application last month in what they said would be an effort to better educate and inform county citizens in regards to the modern technology used today in constructing and operating coal ash landfills.

Because the application was withdrawn prior to the issue reaching the board of commissioners for their decision to approve or deny, VistaGreen can reapply for a Special Use Permit at any time.

JACKSON – Despite the objections of two commissioners, Northampton County local government will expend $2.2 million of taxpayer’s money to... read more