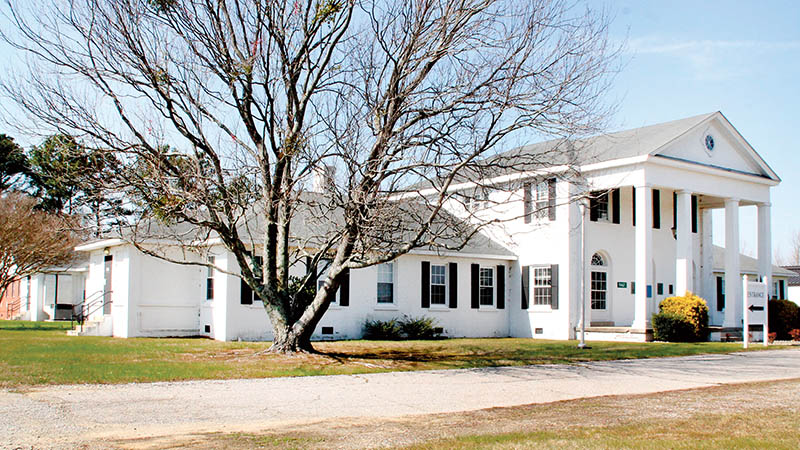 Built in 1924, the front portion of the old Northampton County Department of Social Services building near Jackson will be demolished and replaced, and other buildings on the property renovated to make way for the new home of local government administrative offices. | Staff Photo by Cal Bryant

JACKSON – Despite the objections of two commissioners, Northampton County local government will expend $2.2 million of taxpayer’s money to remodel/refurbish the county’s old DSS building for use as office space.

The vote came at Monday’s regularly scheduled Board of Commissioners meeting, one that ended in a 3-2 decision favoring the project. Commission Vice Chairman Chester Deloatch motioned to approve the project; seconded by Fannie Greene. Board Chairman Robert Carter joined those two in favor of the motion.

The board’s newest two members – Geneva Faulkner and Charles Tyner – both voiced their concerns with spending two-plus million dollars and each cast a “nay” vote.

“We’ve already spent $100,000 (on design and other associated costs) on this and we don’t have $100,000 to give away so I move that we renovate the old DSS building,” said Deloatch in making his motion.

“If we do not move forward with doing something with that building now, it’s going to stay up there and become another eyesore,” Carter remarked. “We don’t want to have another dilapidated structure in our county like the old (Jackson) Eastside (School).”

“Ya’ll had plan (on this project) before I became a commissioner; it’s one I totally disagree with,” said Tyner. “We will have to borrow this money. From what I’ve heard from our (county) finance officer and from our county manager, at this time I do not think Northampton County does not need to go in debt for $2.2 million for renovation of an old building.”

Tyner said the newest portion of the old DSS building, constructed at some point in the 1990’s, can be used.

“We have the space, you just choose not to use that space,” he remarked. “I agree that we can use some extra space, but I do not agree with spending $2.2 million for that space. We can better spend that money; our school system has needs but we don’t have any plans for them.”

Instead of investing in what he called “the past,” Tyner stressed that Northampton needs to invest in “the future.”

“Ya’ll know we need a new courthouse,” Tyner noted. “If Hertford County, Halifax County and Warren County can get these type of new facilities, why can’t we? We need new stuff instead of botching things up. Why can’t we wait on this until we come up with a long-range plan for all our needs.”

Faulkner said she had previously asked for information regarding the county’s current outstanding debt and in what years will those loans be paid off.

“I can’t get an answer on that; so we don’t even know when the loans we already have will mature,” she stated. “It’s like having a car in your yard and that car has problems and you need a new one. But if you don’t know when you’ll be finished paying for the old car, how can you go out and borrow more money to buy a new one?

“We need to put our priorities in order and we need to get our house in order before we go forward with borrowing any money,” Faulkner added.

Carter interjected that he recalled having information presented to the commissioners at their recent board retreat that detailed all outstanding debt service payments and maturity dates.

County Manager Kim Turner confirmed that by saying, “We had a printout of county debt and school debt, with the dates those loans would be paid off. She (county finance officer Leslie Edwards) said she couldn’t tell you which debt it was for the school system.”

“Those figures that Geneva asked for were not given to us; you said you had to go back and research it and bring it back to us,” Tyner remarked. “Things have got to be given to us straight and they have not been given to us straight. I’m not satisfied at all. We have to have a new plan, a new vision on how to get things done.”

After the meeting adjourned, Tony Burnette, president of the Northampton Chapter of the NAACP who had voiced his opposition to the DSS renovation project at a previous meeting of the commissioners, said he was disappointed in the outcome of the vote.

“Spending $2.2 million for renovation of a building that was basically already condemned is ridiculous,” Burnette stated. “This county has so many other needs to be addressed. For one, we need tax relief; at 92 cents (per $100 of property value) we’re the second highest taxed county in the state, but yet we can go out and borrow millions of dollars to renovate an old and outdated building.

“We need money for our school system, for infrastructure needs and other needs,” he continued. “Our commissioners need a long range plan to move this county forward.”

Plans to renovate the old DSS building have been discussed at several previous meetings of the Northampton Commissioners over the past several months.

Turner said those plans include tearing down the old wing of that building (located on NC 305 just north of Jackson), constructing a new space there and also renovating the rear section of the building. Once completed, the County Manager’s office, Human Resources, Finance Office, Economic Development, Board of Elections, and the commissioners’ meeting room will be moved to that location. Additionally, Probation and Parole will move from a rented space into the county office building now used for Finance, and the meeting area for the commissioners. That meeting area will be absorbed by the judicial system as an auxiliary courtroom.

The oldest wing of the former DSS building, the one to be demolished and a new structure erected, was built in 1924.

Northampton DSS moved out of that building and into their new $6.9 million facility in April of 2014.