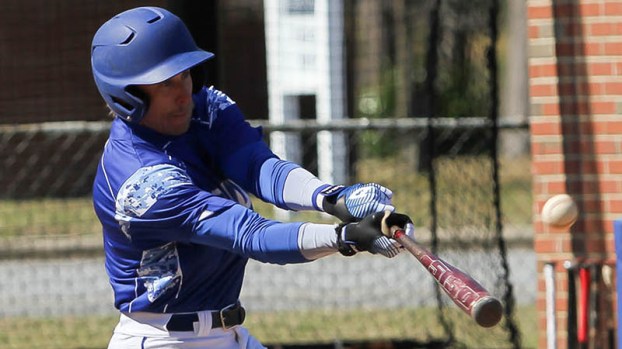 Chowan banged out 19 runs this past weekend in going 2-2 against East Stroudsburg University in a pair of doubleheaders that raised their record to 8-10. | Next Level Photos / Charles Revelle

MURFREESBORO – The Chowan University baseball team moved to 8-10 on the year after going 1-1 with East Stroudsburg University on both Saturday and Sunday at Hawkins Field. ESU came into the weekend ranked fourth in the region as Chowan took two out of four games in the series.

The Hawks dropped the opening game of Saturday’s doubleheader 6-2 but rallied to take the second game 7-3.

The Hawks exploded for 12 hits in game two with Marquise Lanier going 3-for-3 with two runs and two runs-batted-in. He got the Hawks an early 2-0 lead with a two-run shot in the bottom of the first inning. Chowan plated a run in the bottom of the third inning and scored four runs off five hits in the fifth inning to help ice the four-run win.

Bailey Lipscomb threw solid innings before Vinny Puma came in to close out the game. Puma struck out four Warrior batters and gave up two runs.

Connor Arcobasso ended the game at 3-for-4 with two runs and two RBI. Julian Lopez had a 2-for-4 plate performance and Aaron Flanagan posted two hits, a run, and an RBI.

Kyle Cross’ walk off single in the bottom of the eighth inning lifted Chowan over East Stroudsburg University in game three of the four-game series 6-5 on Sunday before the Hawks dropped the fourth game 6-4.

After playing from behind for most of the game, the Hawks posted three runs in the bottom of the seventh inning to knot the game at 5-5.  With one out, Connor Arcobasso singled to right center, scoring Harry Markotay and on that same play Aaron Flanagan scored from third base to cut the lead to 5-4. Marquise Lanier blasted a triple to right center field to score Arcobasso and tie the game at 5-5.

Corey Fago, who came in to pitch in relief, got the Hawks out of the top of the eighth, setting up the offense and Cross’ game-winning run for the come-from-behind 6-5 win.

Fago picked up the win after he scattered three hits and struck out five batters in route to his second win of the season. Cross tallied the teams only multiple hit game after going 2-for-4 at the plate.

East Stroudsburg picked up the night cap win with a final of 6-4.

Chowan (8-10) will travel to UNC-Pembroke for a two-game series today (Tuesday) and tomorrow.