RALEIGH – After splitting their two games on Friday, the Chowan University softball team roared back on Saturday and Sunday with three straight wins, good enough overall to move them within a game of .500 at 11-12 on the season.

Friday’s first day of the Shaw University Invitational saw Chowan battle from behind to beat Shepherd University 4-3 in their opening game but fell to Wayne State University (MI) 3-0 in the second game of the night. 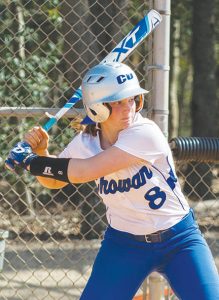 Chowan’s Kayla Robins picked up three softball wins on the mound and smacked her second home run of the year as the Hawks went 4-1 last weekend at the Shaw University Invitational in Raleigh. | Photo by Angie Todd

Saturday the team picked up two wins beginning with a decisive 6-0 shutout win over Clarion State (PA) to open play and followed that up with another dramatic come from behind rally for a 4-3 win over Mansfield University.

Kayla Robins continued her dominating ways in the shut out win, striking out 11 Clarion batters in route to her seventh victory of the year. Freshman infielder Brittany Parson had a 2-for-3 plate performance against the Eagles with a double and a run scored. Then in the top of the seventh in the nightcap, her second home run of the day was good for two runs and a 4-3 win over Mansfield University. Shannon Buchanan kept Mansfield off the base paths in the bottom of the seventh for her third complete game victory of the season and the Hawks’ 10th win of the year.  Danielle Baccus was perfect at the plate, going 4-4 with a run and an RBI in the win.

Sunday, Chowan capped it off with a 9-3 win over Barton College to wrap up play. Robins struck out 11 Bulldogs batters for her eighth win of the season. She also knocked in two runs with a homerun. With a 3-2 lead heading into the bottom of the 5th inning, the Hawks exploded for six runs to help spread the lead to 9-3, good enough for the eventual win.  Baccus ended the day 2-for-4 at the plate. Kris Neal went 2-for-3 with a double and two runs batted in. Katrina Simmons also collected two hits.

Chowan will next travel to play in the West Virginia Wesleyan College Tournament March 10-12.