MURFREESBORO – The Chowan University women’s lacrosse team suffered an 18-8 loss to Emmanuel College here Saturday afternoon dropping them to 1-4 overall and 1-2 in Conference Carolinas play after the loss. It was the Hawks’ first league action.

The Lions opened the match by scoring four goals in the first two minutes. CU’s Heather Orell got the Hawks on the board with one of her four match goals. Under a minute later Leslie Escobar cut the Lion lead to 4-2 with an unassisted goal. Tashana Barnett and Orell added a goal each in the first period but Emmanuel took a 10-5 lead into the halftime break.

The Lions went on to out shoot the Hawks 17-12 in the second period and take the win 18-8 as Orell notched a team-high four goals. Escobar and Barnett added two scores. 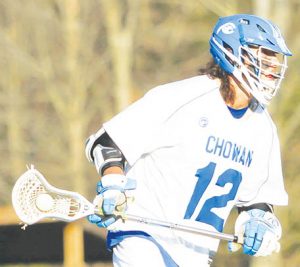 Anthony Alfonso, Jr. had three goals and an assist for Chowan Saturday, but the men’s lacrosse team fell to Davis and Elkins 22-17, while the Hawk women lost their Conference Carolinas opener 18-8 to Emmanuel College as both clubs played at home. | Next Level Photos / Charles Revelle

The Hawk women will take the week off before hitting the field again next Saturday, March 11, when Lees-McRae comes to Murfreesboro for a 3:30 p.m. Conference Carolinas match.

Following that contest, the Chowan men’s team suffered a 22-17 non-conference loss to Davis & Elkins College, falling to 0-4 on the year.

CU’s Nick Lavoy found the back of the net eight times and handed out three assists in the match to lead all scorers.

Chowan took an early lead at 7-5 at the completion of the first quarter but Davis & Elkins recovered in the second quarter to take a narrow 13-10 lead in to the halftime break. The Senators went on to outscore the Hawks 9-7 in the second half to secure the 22-17 win.

Markis Harrison and John Crandall combined efforts in goal for the Hawks. Harrison picked up 11 saves and allowed 13 goals in thirty minutes of play. Crandall gave up nine goals and had 10 saves.

Noah Holloway accounted for two goals and three assists while Anthony Alfonso, Jr. scored three goals and handed out an assist. For D & E, Matthew Dyck tallied a team-high five goals. Kyle Seago collected the win in goal after getting 12 saves in sixty minutes of play.

The Hawks will return to action Wednesday, March 8th with a road game at the University of Alabama-Huntsville.