‘Ahead of the curve’

MERRY HILL – As Hurricane Matthew recovery enters its fifth month, Bertie County residents heard an update on the county’s efforts to alleviate flooding problems caused with the areas third and fourth major overruns in the past dozen years.

Part of that will be addressed this week beginning with a pair of planned public meetings in Hertford and Bertie counties.

The N.C. Resilient Redevelopment Plan (NCRRP) will be the topic of discussion on Tuesday night at the EOC/911 Center behind the Hertford County Courthouse in Winton, with a similar input hearing to be held at the Windsor Community Building for Bertie County residents on Thursday, March 9. Both meetings are from 7-9 p.m.

The public meetings will introduce the NCRRP program to the community and get input from residents about damages from the hurricane and what needs to be rebuilt.

At the February meeting of the Bertie County Commissioners held at the Midway Community Building in Merry Hill, the board and County Manager Scott Sauer addressed some of those concerns relating to efforts to secure grant funding and hydrological (water distribution) study proposals. 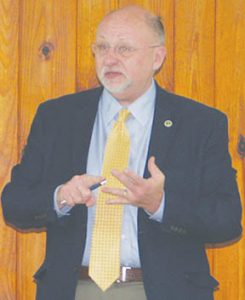 “We’re working with a hydrologist, and also Dr. Stan Riggs (an East Carolina University professor and noted coastal marine geologist/engineer) who’s been here five times,” said Commission chair John Trent. “We’ve been up to Kelford where this rising water actually started at, and to Hoggard’s Mill where most of the water that comes into Windsor comes from.”

Trent said a former dam, as well as the nomenclature of the terrain in the northwestern portions of the county, contributes to the inundation.

“As you go up the Cashie River there’s a 20-foot wall of water behind the railroad tracks that sit approximately 10 feet off the ground from the center of the road,” Trent continued. “Behind that it sinks down where the water breaches and washed the railroad tracks out for an approximately 350 yard area.  When that happens, all the water rushes down toward Windsor and comes out at Hoggard’s Mill.”

Trent said the Commissioners had a meeting slated with the region’s legislative representatives in Washington, DC this past week and weekend; and hoped to solicit aid from Congressman G.K. Butterfield as well as U.S. Senators Thom Tillis and Richard Burr.

“What we’re taking them is this information because we want letters of support from them so that we can now get grants and monies for feasibility studies we need to get done,” Trent said. “We’ve already identified eight places both up and down stream where it needs to be fixed.  We keep fixing the problem after it happens; let’s try to figure out instead why it keeps happening.”

Later during the meeting, County Manager Sauer reviewed further recovery activities; among them: CADA workers provided for service through the MidEast Commission.

“The county applied for some grant-funded workers to help with the storm clean-up,” Sauer stated. “At one time there were as many as 30 workers daily earning $11 dollars per hour working with the Water Department, the Maintenance Department, and Emergency Services, and their first job was with Lawrence Memorial Library off-loading, assessing, and inventorying 2,202 boxes of books to see about the water damage.

Sauer said they were still seeking aid from the Federal Emergency Management Act (FEMA) to assist with replacement of the EMS station in Windsor, the Library, and the Cooperative Extension office.

“What you’re seeing is that your Commissioners are busy all the time working on these flooding issues,” the County Manager concluded.

Representatives from the Golden Leaf Foundation have also met with Bertie officials and Sauer says he hopes the county can get its share of part of the $25 million awarded to the Golden LEAF to address disaster recovery following Hurricane Matthew in eastern North Carolina.  He said the focus would be on getting a new library building as well as a Cooperative Extension building.

“We have to really get organized, fight hard, and make our case,” Sauer reiterated.

County Finance Officer William Roberson, who also attended the meeting with state Emergency Services officials regarding the Resilient Redevelopment Planning Program, said a lot of other counties affected by the Hurricane were watching Bertie’s lead.

“Now that’s a first, isn’t it,” said Trent, with a smile. “Ahead of the curve, doing something before other counties have gotten to it, and now they’re trying to figure out what we (Commissioners) are doing with the kinds of people we have in here helping us.”