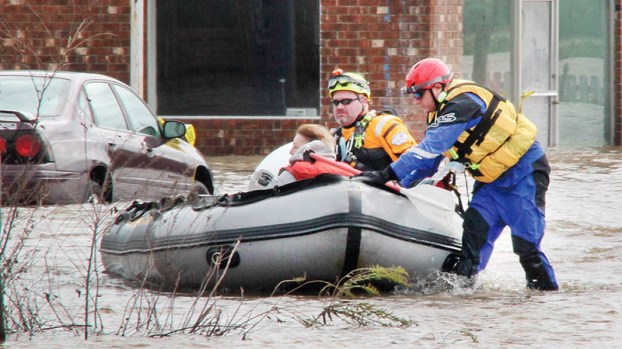 A swift water rescue team, transporting an individual flooded from their home in the aftermath of Hurricane Matthew, heads towards dry ground off US 13 south of Ahoskie. 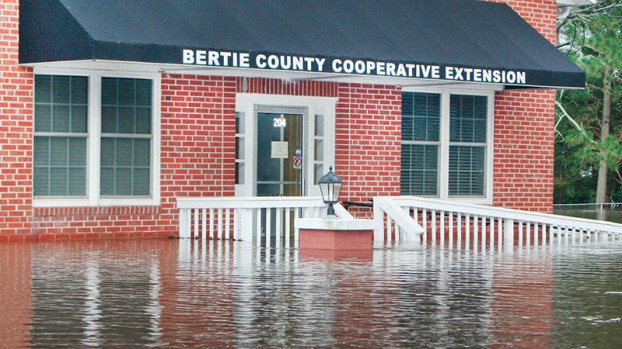 Like so many other residences, public buildings and businesses in downtown Windsor, the Bertie County Cooperative Extension office suffered damage during consecutive tropical weather systems in late September and early October of 2016. | File Photos

It may have been months since the devastation of Hurricane Matthew, but affected areas of North Carolina continue to rebuild while others are still awaiting assistance.

Part of that recovery includes a pair of planned public meetings next week in Hertford and Bertie counties.

The N.C. Resilient Redevelopment Plan (NCRRP) will be the topic of discussion on Tuesday, March 7, at a public meeting at the EOC/911 Center behind the Hertford County Courthouse in Winton.   A similar input hearing will be held at the Windsor Community Building for Bertie County residents on Thursday, March 9. Both meetings are from 7-9 p.m.

According to information from the North Carolina Emergency Management state website, the public meetings will introduce the NCRRP program to the community and get input from residents about damages from the hurricane and what needs to be rebuilt.

The planning process will be a highly collaborative effort and will entail three robust rounds of discovery, analysis, collaboration and interaction with county officials, staff, municipal leaders and the public on damage, needs, and strategies. These rounds will entail on-site meetings and discussion with subject matter experts and planners. The three meetings will include:

“They want to collect all relevant information regarding unmet needs,” said Bertie County Manager Scott Sauer, who is heading the program in his county along with Bertie Emergency Services Director Mitch Cooper. “This includes farms, businesses, residential properties, as well as some of the county’s concerns.”

“They want to hear directly from the public that was impacted by Matthew, and are very interested in both residential and business owners,” added Sauer.

These are just two of several public meetings where residents input are critical to the development of resilient redevelopment strategies.

“These guys come out of West Virginia and they’ll do studies and help us figure out what we need to do in the future to prevent further loss,” said Cooper.

Bertie and Hertford are just two of 49 counties in the state that were impacted by the hurricane.  The NCRRP program’s list of those unmet needs must be presented before the General Assembly by May 1.

“They want to be as broad as possible so they don’t overlook any needs a family or homeowner may have; specifically, where they did not have insurance to cover their loss,” added Sauer.

This program stems from the Disaster Recovery Act of 2016, which directed North Carolina Emergency Management (NCEM) to facilitate and oversee the generation of Resilient Redevelopment Plans for the counties impacted by Hurricane Matthew and receiving federal declarations.

The public meeting will also give residents an opportunity to share their input on damages from the hurricane and discuss needs to rebuild.

“The important thing is that they’re trying to get into the community,” said Hertford County Emergency Management Director Chris Smith. “We did have damage, substantial damage, from Hurricane Matthew.  We’ve been doing damage assessments. I’m not sure what this will mean for us as far as what the plan will get us; but I’m sure there will be monetary value in the form of some additional grants. I’m looking to learn as much from this meeting as the general public.”

Funding of nearly $1 million for the Hurricane Matthew Disaster Recovery and Resilience Initiative(HMDRRI) is provided through three entities: The N.C. Policy Collaboratory at UNC-Chapel Hill; the State of North Carolina through disaster-recovery legislation from the General Assembly; and the Department of Homeland Security Science and Technology Directive.

“Rough estimate reports (of loss) that we have put the dollar amount at around $20-$25 million, about half of which was initially agricultural loss,” said Sauer. “Some of those numbers may have expanded, but we’re envisioning that it will be somewhere within that range.”

“As of last month, we’re still taking first-time estimates of damage in our county,” said Smith. “We didn’t include agriculture losses in our number.  I’d be remiss to give you a number off the top of my head, because some of the damages are still trickling in. As a rough estimate, we had approximately $1 million in damage to residential – commercial property alone; and this does not include vehicles or crop damage which was substantial as well. ”

NCEM has already assembled a wealth of data, resources, and technical expertise from state agencies, the private sector, and the UNC system to support the development of innovative best practice strategies that might be implemented.