WELDON – For the tenth year, Halifax Community College (HCC) held its “Saluting Our Local African-American Heroes” celebration. Special honors were bestowed on six community leaders during the Feb. 21 ceremony held at The Centre. 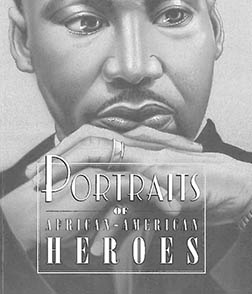 Heroes were chosen based on their commitment and contributions to the community, unselfish devotion to others, initiative, innovation and leadership, and willingness to share time and wisdom through community service.

“Here in Halifax County, we are privileged to have so many heroes living among us,” said HCC President, Dr. Michael A. Elam. “We have many citizens who have committed their lives to the future of others. The heroes in the Roanoke Valley have forever changed the future of our area. Today, we honor them.”

The six honorees were:

Ophelia Gould Faison was a career teacher for Halifax County Schools. For 15 years, she served as chairperson for the Dr. Martin Luther King, Jr. celebration in Halifax County. She promoted the phrase “A Day On, Not a Day Off” to encourage all constituents to serve together, honoring the legacy of Dr. Martin Luther King, Jr. She also orchestrated the very first MLK Day Parade in Littleton, NC – now in its fifth year.

Faison is also a charter member of the Southern Christian Leadership Conference, and was instrumental in coordinating the annual SCLC wreath laying ceremony at MLK Park in Roanoke Rapids.

Faison is a champion for our citizens. She has worked tirelessly to protect and defend voter rights, voter education, and participation causes. She is an exemplary leader to all who know and admire her.

Ruby Gerald provided stellar leadership for the Roanoke Valley Chamber of Commerce and kept the finances of the organization stable during an interim period. Through her commitment and leadership, the chamber was also able to identify and hire a new President/CEO who will start March 1, 2017.

She serves on the board of Hannah’s Place, a shelter for women and children who are victims of domestic violence, and she serves as its treasurer. She has single-handedly protected the organization from difficulties. She has served on the executive board of the Roanoke Avenue Business Alliance for two years to help plan and work events in Roanoke Rapids to raise funds for the alliance.

In addition, she works with area businesses to set up and manage Job Fairs in the Roanoke Valley. She has also managed the Leadership Roanoke Valley program for the RV Chamber of Commerce.

Her commitment to the Roanoke Valley goes beyond her civic volunteerism. She also sponsored a youth adult her in the Roanoke Valley that had the opportunity to participate in the American Idol competition. She used her personal funds so the contestant could have hotel and travel funds to be a contestant on the show.

Graves has devoted his life to public service, both in his professional pursuits as well as through community service. He has prosecuted crimes ranging from traffic tickets to murder in Halifax, Northampton, Hertford, Bertie, Nash, Edgecombe and Wilson counties.

He devotes his free time to a number of civic organizations including the Jackson Square Masonic Lodge, the Roanoke Chowan Scottish Rite Consistory, the Roanoke Rapids Rotary Club, and the Roanoke Valley chapter of the Southern Christian Leadership Coalition.

In his capacity as an adjunct professor at Halifax Community College, he has assisted many young people begin careers in the law enforcement field by serving as a mentor and adviser.

In the aftermath of Hurricane Matthew, Graves mobilized several Masonic lodges in the area and coordinated the delivery of water and supplies to charity and families in the Roanoke valley area over the course of several days. Through this effort, he established a network that will be utilized in the future in the case of any natural or man-made disaster.

Smith-Ingram has been an avid educator and community minister for all ages throughout our service area and extending to most every Northeastern North Carolina county across the state. She is a pioneer for change in this state, advocating for better economic and workforce opportunities, better education opportunities, better health care, and better social services support.

In January 2017 she received a special VIP invitation to the White House for President Obama’s outgoing reception, which was a result of all of the outreach and hard work she does throughout the year. She has been awarded both the State Employees Credit Union North Carolina Freshmen Legislator of the Year 2016 and the Outstanding Women of the Year 2017.

Raymond Vaughn, Sr. has been a pillar within the community through public service and his relentless commitment to the citizens of Northampton County and great State of North Carolina for over 30 years.

He is a native of Northampton County where he continues to reside and work diligently through public serve in the community that he loves. As a retiree of the state of North Carolina in 2004 and retirement from the Town of Garysburg as Chief of Police in 2014, he continues to give back to the community through his continued service as a Deputy Sheriff with Northampton County where he serves a Bailiff.

After serving in the U.S. Coast Guard, Raymond began his career in public service as Police Officer for the Town of Rich Square and Correctional Officer at Odom Correctional Institute in 1974. As Chief of Police of Garysburg for 27 years, his passion was seen through his efforts as President of Garysburg Youth Council and active membership of Garysburg Community Crime Watch.

He was the first African American man to serve as Chair on the Board of Governors for the State Employees Association of NC in the early 2000’s. He is currently the Vice President of Northampton County SEANC chapter where he continues to advocate for the rights and benefits of current, retired and future state employees through recruitment, outreach, and activism.

If one has been to the emergency room at Halifax Regional Medical Center it is probable that Judy Williams has had an impact on your life. She has made a difficult job look easy for almost 30 years, attending to patients in all types of situations.

She stays incredibly busy in the community serving on many committees such as the Halifax County Domestic Violence Task Force, The Halifax Child Protection Team, HRMC Patients Experience Team and more. She volunteers with the Children’s Creative Center, Garysburg Parks and Recreation Department and the Weldon High School Athletic Department.

Judy has been preceptor for countless new nurses and EMS professionals teaching and guiding them into their life saving profession. As she has taught these individuals and mentored those already in the career she stresses the importance of treating each individual case as if it was the most important.

She started as a receptionist in the hospital in 1981 and returned to school to obtain her Register Nursing license to now she serves as a charge nurse in the emergency room having worn many specialized hats along the way.