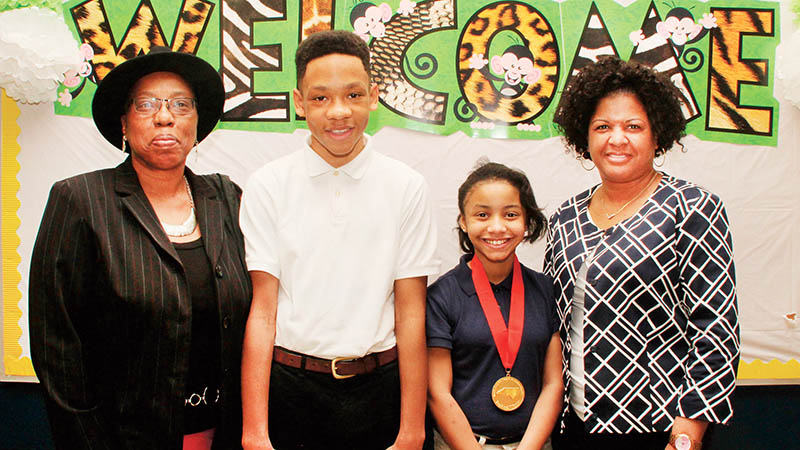 MURFREESBORO – It’s not a rarity to see a local student earn accolades at the regional level and advance to a statewide event.

There, Blackwell’s entry – “The Sun: That’s One Cheap Battery” – was awarded a perfect score by the judges, which gave first-place.

By sweeping the top two spots at the Regional competition, Blackwell and Bradley will both advance to the 2017 North Carolina Science and Engineering Fair, slated March 24-25 on the campus of Meredith College in Raleigh.

Riverview Elementary School Principal Lori Morings said she was extremely proud of the efforts of her award-winning duo.

“We had a very competitive on-campus Science Fair earlier this year where a number of our entries could have faired very well at the regional level,” Morings said. “We were delighted to learn that Cole and Ray’Chelle were judged as the top two at the event held in Greenville.” 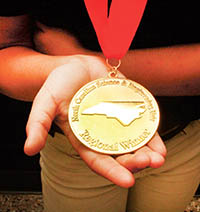 Bradley holds the medal she won at the regional competition.

When asked if Riverview had ever posted a one-two sweep at the Regional Science Fair, Morings was quick to respond, “No, this is a first for our school.”

For Blackwell, his award-winning entry was an investigation into which was more efficient for powering a radio – a 6-volt solar cell or four, AA batteries. As a result of his inquisitive efforts, Blackwell said he predicted that a solar cell would produce enough energy to make the radio operate as efficiently as the batteries.

“I always had an interest in solar energy,” said Blackwell, the son of April and Jock Blackwell of Ahoskie.

He added that he came up with theme of his science project after finding an old radio in his home.

“I figured that would make for an interesting project, discovering if I could make that radio work off a solar cell as compared to batteries,” he remarked. “When I got everything hooked up to the solar cell, I took it outside and the radio worked….it picked up every station available in our area.”

Additionally, Blackwell learned through his research that unlike batteries, the solar cell was able to provide an endless stream of power to the radio.

“That’s the good thing about a solar cell, they do not have to be replaced like batteries,” he said.

Blackwell added that he would like to study science and engineering in college.

“I enjoy math, science and reading,” he said.

Bradley, the daughter of Michelle Hunter of Murfreesboro, said the science fair topic she chose was developed on her own.

“I wanted to do something that was fun and cool, but at the same time was knowledge we can all use,” she stated.

Bradley said once she decided to investigate bubble gum, two questions popped in her head….why do people chew it and why are there so many difference flavors?

“The purpose of my experiment was to find out which brand of bubble gum would last the longest in holding its flavor,” Bradley said.

Additionally, she said the results of her experiment could help people choose the best brand of bubble gum as well as getting the most out of the money they spent for that brand.

Bradley said her favorite subject is math. She wants to attend college, but is undecided right now of a career path.

“I want to study to either become a lawyer or a scientist, one that uses research to find a cure for some of the diseases we have,” Bradley said.

“We wish much luck to Cole and Ray’Chelle as they move forward to the state Science and Engineering Fair,” said Morings. “It’s so good that our kids in this area are recognized for their efforts.”