Falcons fall in fourth round

WINDSOR – It was a beautiful ride.

The Bertie High girl’s basketball team had fought their way through 30 games – only two more were needed to become state champions.

But it won’t happen. 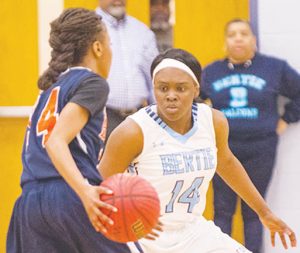 A scrappy defense and unaccustomed turnovers proved the Lady Falcons undoing Tuesday night in the 2A Eastern semi-finals as Bartlett-Yancey – the fifth-seed – knocked off number-one, 48-39, and ended Bertie’s season at 28-2.

“(The defense) frustrated us like it did because we didn’t attack it like we should have,” said a somber Bertie coach Kelvin Hayes afterward. “we we a little reluctant to shoot it, we didn’t play our brand of basketball.”

A three-pointer from Nyasia Barnes with 4:26 left in the fourth quarter got Bertie within six at 40-34. But the Falcons could come no closer than that after trailing for much of the final three quarters. That left the ladies in Blue-and-White feeling the sting of defeat for only the second time this season and first time on their own gym floor.

“We just played a little too quick,” added Hayes. “It was one pass-one shot, and we didn’t attack the basket. And the turnovers, we must have had 20 turnovers; more than we’ve had all year.”

Bertie shot only 14-of-40 from the floor, and their normally deadly three-point shooting abandoned them as they only made two shots from beyond the arc all night.

Normally, the Falcons are the aggressor, and their swarming pressure defense usually produced turnovers they can convert into easy lay-ups. Tuesday night, it was Bertie fumbling the ball away, whipping passes out of bounds, and getting traveling calls.

Senior Carlisa Spivey, who had her best game of the tournament Saturday with a double-double of 16 points and 14 rebounds, was held scoreless and missed all seven of her shots from the floor, though she spent much of the game on the bench plagued with foul trouble before fouling out with a minute left in the game.

“I told the girls getting 20 wins would’ve been a big thing,” Hayes added. “Getting 28 wins is awesome; I just hate losing when I thought we were the better team.” 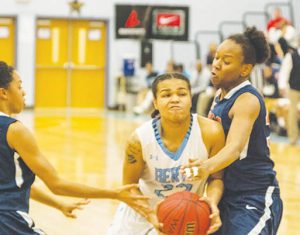 Bertie’s Autum Morings (in white) is surrounded by Bartlett-Yancey defenders in Tuesday’s game. Morings, a senior, scored 15 points to lead Bertie in what would be her final high school game.

B-Y made a strong case for themselves in the nine-point victory. Their defense, switching from man-to-man to various zone formations, kept Bertie rattled all night.

The game started well enough for the home team as Jomiya Early put Bertie on the board with a lay-up, followed later by another. Morings was fouled twice on separate possessions, making three-of-four free throws and staking the Falcons to an 8-2 lead. But that’s when veteran B-Y coach Lindsey Page called time out. Bertie only got two more free throws the rest of the quarter as the Lady Buccaneers outscored the Falcons 10-2 for a 12-10 lead after one.

Following a Bucs jump shot, Barnes hit her first triple followed by a lay-up by Morings and Bertie re-claimed the lead 15-14. Lassiter drained two foul shots for the visitors to put B-Y back in front, but Akia Jordan’s lay-up sent Bertie back on top, 17-16. A free throw tied it before Barnes’ running one-hander got the Falcons back the lead, 19-17.

It was Bertie’s last time in front.

Bucs’ center Kiyana Brown, saddled with two fouls – as was Spivey midway through the period – got a putback, tying it at 19. But on the next B-Y possession Spivey was called for her third foul and the Bucs started to attack inside. Bertie never scored again and trailed 26-19 at halftime.

A three-pointer put Bartlett-Yancey up by ten, 29-19, early in the third quarter, and Bertie didn’t make a run until there were two minutes left in the period. Morings’ lay-up made it a six-point game, 35-29, but another Bertie scoring drought had the Falcons eight points in the hole, 37-29, entering the fourth.

The Bucs stayed ahead by that much until Barnes’ triple, but Bertie couldn’t get stops. B-Y was keeping it close with poor free-throw shooting – 8-of-18 in the quarter – but Bertie could never take advantage. One-by-one the seniors fouled out to standing ovations in the last two minutes, and all that was left following the nine-point loss when the horn sounded was a lot of wondering what might have been.

“Defense is what won it for us,” said veteran Bartlett-Yancey coach Lindsey Page. “We had a poor offensive night, but our defense was the key to the game.”

Bertie loses seven seniors – four as starters in Jordan, Early, Morings, and Spivey – along with Shanidra Outlaw, Germika Parker, and Kquintajhea Slade. The Falcons do return a strong line-up headed by Northeastern Coastal Conference Player-of-the-Year Akiya King, who missed the playoffs due to a knee injury; and a jayvee squad that finished the season 11-1 in conference and 18-3, overall.

“I’m real proud of everybody. We showed everybody a lot this season,” Hayes said. “It’s kind of sad it’s over, but you’ve got to see the bright side.”