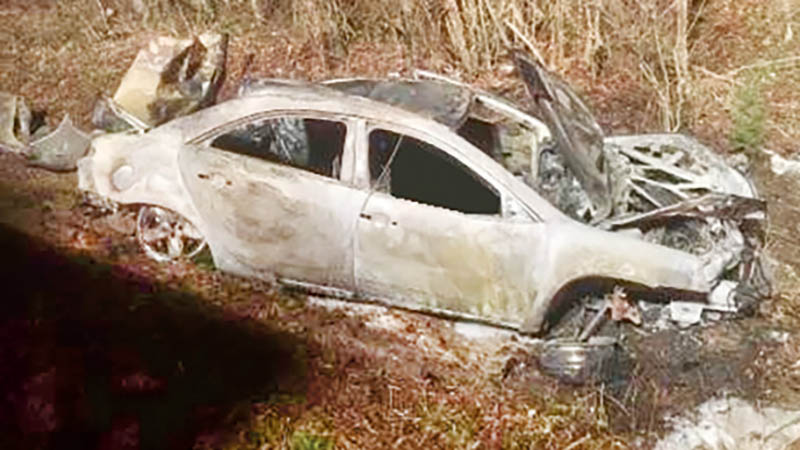 Shown here is the charred remains of a vehicle that crashed, caught fire, and claimed two lives early Sunday morning off NC 46 in Gaston. | Photo by Gaston Fire & Rescue

GASTON – Autopsies have been ordered to identify two individuals discovered inside the charred remains of an automobile that apparently crashed and burned near here early Sunday morning.

Based on the initial evaluation performed by emergency responders at the scene of the crash, it appears that the driver was male and he had a female passenger.

According to a press release sent later on Sunday by Gaston Fire & Rescue Chief Ed Porter Jr., units from his department were dispatched just before 2 a.m. Sunday to the report of a vehicle on fire in a wooded area off NC 46 near Hickory Hollow Road in Gaston.

Porter added that the passenger car was fully engulfed in flames at the time of the arrival of the emergency responders. Firefighters were able to quickly extinguish the blaze. It was at that point where the gruesome discovery was made that two individuals had perished in the flames.

The Chief said the rear of the vehicle was found crushed into itself causing the fuel tank to split. The probable cause of the fire is suspected to be from the fuel tank rupture following the collision.

The highway was closed to one lane of travel during the incident. Crews remained on scene for approximately three hours.

The North Carolina Highway Patrol is leading the accident investigation.