MERRY HILL – At the regular monthly meeting of the Bertie County Commissioners, Jennifer Patterson, the new director of the Albemarle Regional Library (ARL) – a system of seven libraries in Hertford, Bertie, and Gates counties, with its head office in Winton – briefed the Board on a variety of topics.

Primarily, the new administrator, who assumed her position in December as Teresa Cole’s successor, wanted to make the Commissioners and residents aware of what’s been done since her arrival.

Patterson assumed the duties of director of the three-county system in December.  A native of Winston-Salem, Patterson graduated from Winston-Salem State in 2010, where she worked in the University Library while getting her Masters in Library Science from UNC-Greensboro.  Prior to accepting the post with Albemarle, Patterson worked in public libraries in both Union and Catawba counties.

Patterson comes into her position aware of the damage to the county’s infrastructure, including Lawrence Memorial Library, wreaked by the storms of 2016. 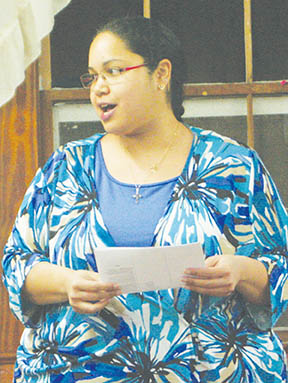 “We’ve been in the process of going through all our stuff from the flood,” Patterson said. “The library had about 2200 boxes to go through, not to mention furniture, shelving, basically everything we had.”

Patterson said the inventory is proceeding well, and that she hopes through insurance claims as well as aid from FEMA, the library may be able to recoup some of its losses.

“The NC State Library is offering this county an additional grant up to $50,000 to re-coup some of our losses,” Patterson stated.

The Director said she is also working with Bertie County Manager Scott Sauer to find an alternative site for the Lawrence Memorial Library.

There is concern from the Lawrence branch staff that after five floods in 19 years, a permanent relocation away from Dundee Street in downtown Windsor would be most desirable.

At its November 7 meeting, the Commissioners discussed, among other project opportunities, the new construction and location of both the Library and the county’s Cooperative Extension offices at the current county’s Department of Social Services complex located off South King Street. The county owns some 15 acres of land at that location.

Of paramount concern to the Commissioners is the lack of public library services locally, the re-deployment of staff to other regional facilities and the continued expenditure of utilities for a vacant facility to prevent further moisture related damage.

Patterson says the State Library, with aid from the General Assembly and the Public Library Directors Association – through a special $300,000 grant – has created the NC Kids Digital Library.

“Now every library system in North Carolina has access to free children’s E-books,” Patterson noted. “So whatever device you’re using you can get those books for free. We have about 700 titles, all for free.”

Patterson says the digital library can be accessed through the ARL’s website: arlnc.org – and from there is a link to the Kids Library.

“That’s about 600 to 700 free books that you can access on your mobile devices,” she acknowledged.

“At one of the FEMA meetings we attended, they said – for lack of a better term – there were modular units available to us, just as a temporary fix with shelving, internet access, and the whole works,” Wesson indicated. “You might want to take a look and see if that is still available.”

Bertie County Emergency Management Director Mitch Cooper says his department is also working with ARL to try and secure a spot (the vacant storefront near the Windsor Food Lion is another possible location) and have FEMA to pay for it temporarily (six to 12 months) until a permanent location can be found as part of the Golden Leaf’s aid program.