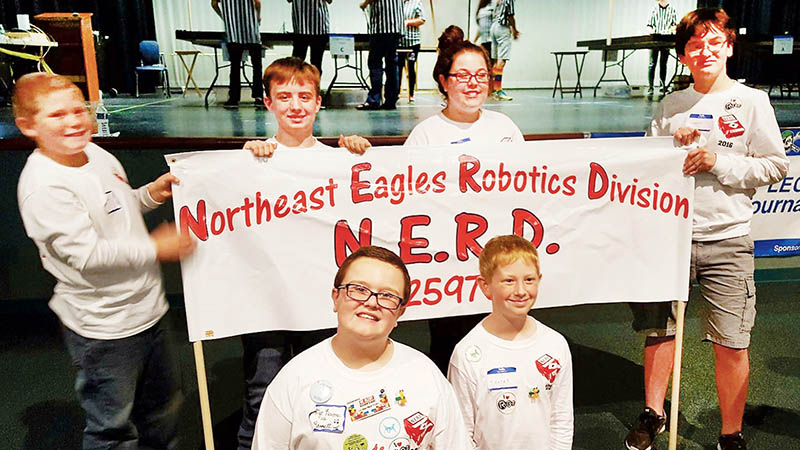 WINTERVILLE – High fives with teammates; cheering fans lining the hallways; referees keeping watch over the playing field; and hearing the buzzer and knowing that final winning play was just ONE second too late!

This was the experience of the Northeast Eagles Robotics Division (NERD) in their very first competition.

Northeast Academy was one of 27 robotics teams taking part in the FIRST Lego League Regional competition in Winterville. The NERD rookie team placed 7th in the table-top robot mission challenge and received high marks from the judges during their interviews in the areas of robot design, project development, and project presentation, as well as in the demonstration of core values.

Founded in 1989 by Dean Kamen, FIRST (For Inspiration & Recognition of Science & Technology) is now recognized worldwide as the leading not-for-profit STEM (Science, Technology, Engineering, & Math) engagement program for kids. As founder, Kamen’s goal is to create “a world where science and technology are celebrated and where young people can dream of becoming science and technology leaders.”

FIRST Lego League is an alliance between FIRST and the Lego Group. Teams of no more than 10 members, ages 9 – 14, research a real-world problem and develop a solution, which they creatively share in a presentation. In addition, members must design, build, and program a robot to compete on a table-top playing field.  All of these challenges must be accomplished while practicing the program’s core values, which promote teamwork and friendly competition.

Regional competitions provide a “sporty atmosphere” in which the students are mostly on their own.

Usalis compared the experience to that of a football game except that once the game begins, there can be no communication between the team and the coaches.

FIRST includes programs for all age levels, K-12, and has a proven positive impact on its participants. FIRST team members are more interested in doing well in school, more interested in attending college, and twice as likely to major in science or engineering.  Members also gain life skills in problem solving, time management, and communication.  Over 75 percent of FIRST alumni are in a STEM field as a student or professional.

The Northeast Academy Robotics Division is continuing its season in FIRST Lego League by just recently accepting two new challenges. Deadlines are in February and March, so team members are once again having fun while applying STEM concepts.  They are currently in the process of designing and programming their robots to complete a mission in competition with thousands of teams across the country.