‘Journey’ of a lifetime 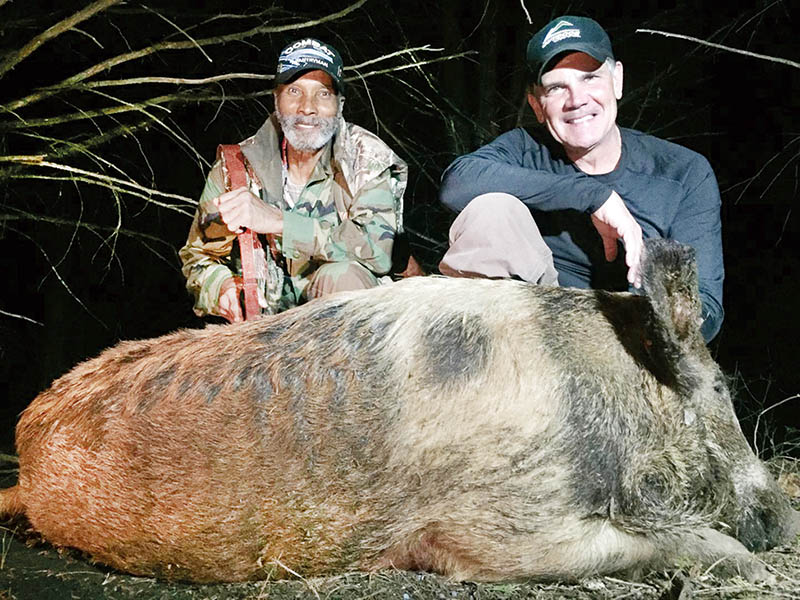 WOODLAND – On Monday afternoon of this week, William “Buddy” Powell was right where he wanted to be….hunting rabbits on the outskirts of Potecasi.

That was a far cry from where Powell found himself one week earlier….hunting wild boar in Oklahoma.

Powell is now back home in his native Northampton County, one week removed from an all-expenses paid trip courtesy of “The Journey” – a weekly show that airs on The Outdoor Channel.

Powell left for his wild boar hunting trip on Monday of last week. He flew from Norfolk, VA, to New York, NY and then to Dallas, Texas.

“Dave (Watson, host of “The Journey”) picked me up in Dallas and we drove to Oklahoma,” said Powell, taking a break on Monday from his local rabbit hunting excursion.

Little did Powell know at that time of what the hunting itinerary would be on Tuesday.

“I’ve been retired now for about 15 years, so I’m use to sleeping in every morning,” Powell said. “So, imagine my surprise on Tuesday morning of last week when Dave and his cameraman knocked on my hotel room door at 5 a.m. and asked if I was ready to go kill some hogs. There they were dressed in cammo and there I was in my underwear. I told them to give me 15 minutes and I’d be ready.”

Powell said they drove to a farm and met with the property owner.

“We were taken to tree stands and I’m siting up there in mine and nothing is happening…..I didn’t even see a squirrel,” Powell noted. “I’m thinking to myself, where’s all these hogs? No sooner than that thought crossed my mind; I hear all this ruckus and the woods is full of hogs.”

Powell said he watched two fairly large male hogs fighting. When one turned and left his field of vision, Powell said he drew a bead on the other, and with the TV camera capturing the moment, he squeezed the trigger on his rifle.

“I heard the hog squeal in pain, so I knew I had hit him,” Powell remarked. “I got down from my stand and was picked-up in a ATV, where he went to the spot where the hog went down. From there we followed the blood trail for about 50 yards and found the dead hog.”

Powell said his “kill” tipped the scales at over 300 pounds.

“The man that owned the property said it was the largest one killed there so far this year,” Powell said.

In a show of respect for Powell’s military service in Vietnam, the property owner promised to have the meat processed and shipped to Woodland.

“He (property owner) said he would even pay to have the hog skull mounted and shipped to me as well,” Powell said.

The hunt continued on Wednesday morning. There, Powell said he fired at a smaller hog, but apparently missed.

“The cameraman said the shot went about two inches over top of the hog’s back. But I still think I grazed it,” Powell said with a hearty laugh.

In another funny moment, Powell said as he and Watson, joined by the cameraman, were traveling along an Oklahoma backroad, they witnessed a roadrunner (a bird that inhabits the southwestern U.S.) cross in front of them.

“I shouted, whoa…whoa; we need to stop because Wiley C. Coyote is going to be hot on that roadrunner’s heels,” chuckled Powell, referencing the famous TV cartoon show from decades past.

“I had a great time out there,” Powell stressed. “I thank Dave and his TV folks for allowing me this opportunity to hunt for wild hogs out west. But in all seriousness, I’m glad to be back in Northampton County.”

Powell’s hunting excursion to Oklahoma will air three times on The Outdoor Channel: 10 am on March 6; 12 noon on March 8; and 7 pm on March 12.

He learned of his trip on Jan. 27 when Watson, with cameraman in tow, visited The Grapevine Café in downtown Woodland where the Powell family had gathered for dinner.

“This whole thing surprised me; I had no idea what all the commotion was about when I first saw the lights of that (television) camera,” said Powell in an article that published Feb. 2 in this newspaper. “I thought someone was doing a show about this restaurant.

“When I found out that all that commotion was about me, my first reaction was what a blessed person I am,” Powell said humbly.

Powell said he is an avid watcher of The Outdoor Channel as well as “The Journey.”

The entire affair was set-up by Powell’s son, William Jr. of Murfreesboro.

“Daddy loves watching The Outdoor Channel, especially that show,” William Jr. remarked, referencing The Journey. “The show accepts nominations for people to be taken on a hunting or fishing trip based on their special stories in life or for their volunteer work. I nominated my dad because he deserves this, he does so much to help others in this town, all without any recognition. I’m so happy he was chosen.”

For Watson, he travels coast to coast knocking on the doors of ordinary people and surprising them with extra ordinary adventures…all free of charge. From elk hunting in New Mexico to deep sea fishing in Grand Cayman, “The Journey” is a place where dreams come true.

“The Journey is all about saying thank-you; we tell those we honor with these outdoor excursions that we’re grateful to them for performing acts of unselfishness,” said Watson during an interview with the Roanoke-Chowan News-Herald.

“So many go through life doing things for other people and they never receive their rightful recognition for that,” Watson continued. “Doing this television show over the past year has given me the opportunity to meet wonderful, caring, warm human beings. That gives me hope again that humanity in our nation is alive and well.”

“I found out that Buddy was a Vietnam vet; which in itself is worthy of being recognized,” Watson said. “William also told me that his dad would purchase shoes for children in need; went to basketball and football games to support kids when he knew their parents would be unable to attend; and he looks after elderly people in his neighborhood, especially when a storm is coming.

“William ended his nomination by saying his dad would be so happy to go on a hunting trip with me, but even if you do not choose him, I’m glad I had this opportunity to tell you about my dad,” Watson added. “I thought that was a nice sentiment.”