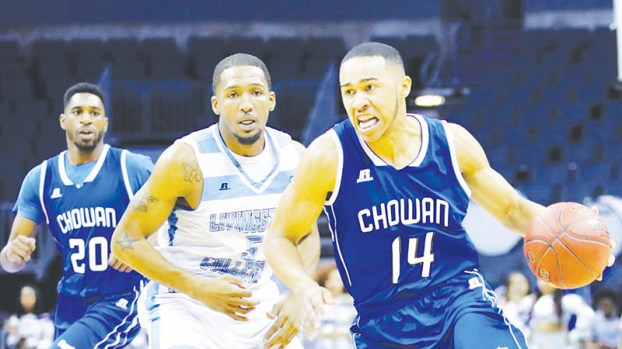 CHARLOTTE – The top free-throw shooting team in the conference couldn’t get them to drop when they needed them.

Livingstone College (11-16) converted at the free throw line down the stretch and squeaked past Chowan here 74-69 in a CIAA Tournament men’s quarterfinal game at the Spectrum Center on Thursday.

The Bears’ rebounding edge (52-to-27) and 14-to-5 advantage in second-chance points were the difference.

Chowan, who had been shooting over 73 percent from the free throw line, made 19-of-33 (57.6 percent), but only made one of four in the final six seconds when they were trailing by two.

The Blue Bears (20-of-29) connected on eight free throws in the final minute including two free throws by All-CIAA player David Duncan for a 70-68 lead with 19.1 seconds remaining. The Hawks had a chance to tie with 6.9 seconds left but missed a free throw and committed a lane violation on another free throw which they made.

All-CIAA Rookie player Roger Ray and Jimmy Wilson each made two free throws in the final 5.6 seconds for the Blue Bears, who are the No. 2 Southern Division seed, are attempting to reach the championship game for the fifth consecutive year.

The Blue Bears relied on free throws to rally past Chowan, which controlled most of the second half. They made 20 of 29 free throws for 69 percent while the Hawks were 19 of 33 for 57.6 percent.

The Hawks were also pounded on the boards as the Blue Bears won the rebounding battle 52-27 which led to a 14-5 advantage in second chance points. David Duncan outrebounded the Hawks by himself as he grabbed 30 boards to go with 13 points.

The Blue Bears started swiftly in the first half, jumping out to a 23-9 lead on Emarri Bailey’s jumper. The Hawks didn’t panic as they finished the half on a 23-to-10 run to close within 33-32 at halftime. The momentum carried over in the second half until the Blue Bears made their final push.

Burhannon had eight points and Duncan had 11 rebounds for the Blue Bears in the first half. Carlos Arroyo scored eight first-half points and Tim Hewett added seven points for the Hawks.

Despite missing more free throws and getting less rebounds, the Hawks still managed to seize control of the second half. Down by one at halftime, the Hawks opened a 55-46 lead on Arroyo’s layup with 12:24 in the game. Their lead reached nine again at 57-48 on All-CIAA player Jeremy Smith’s jumper before the Blue Bears began their run.

“We switched from man-to-man to zone defense and got long rebounds which turned into points,” Arroyo said.

The Blue Bears responded with their own run to tie the game at 68-68 with 40.9 seconds remaining. The rally set up a dramatic finish which resulted in another semifinal appearance for the Blue Bears.

“We started out fast for a change instead of starting slow and had a chance to execute, and then toward the end of the half we started to fade,” Livingstone coach James Stinson said. “We had to regroup and get prepared for the second half. Chowan has a great team and [is] well-coached, so we had to do some things to mix them up.”

Four Chowan players scored in double figures, paced by Arroyo’s 14 points and Smith’s 13. Kevin Kuteyi and Hewett added 12 points each for the Hawks, the number-three seed out of the Northern Division, who connected on 43.1 percent of their shots (22-of-51).

AHOSKIE – Of the 64 boys basketball teams across the state that opened the NCHSAA Class 2-A play-offs last week,... read more