WINDSOR – After two games sped along thanks to the 40-point ‘mercy/sportsmanship’ rule, Bertie High finally found itself in a game where they needed the completely allotted time.

Short, or long, the ticking of the clock had no effect, but it did produce the same result.

The Lady Falcons stormed their way into the fourth round today (Tuesday) after securing a 56-41 third-round win over Roanoke Rapids here Saturday afternoon.

It marked the first time in seven years that Bertie had advanced past the third round.  It also marked the third time this season that Bertie had downed the Lady Yellow Jackets.  In December the Falcons won 50-30 and 53-37, but Jackets head coach Jim Whitmire said he was down players for those games and expected a better match on Saturday; which is what it was for a quarter and two-thirds. 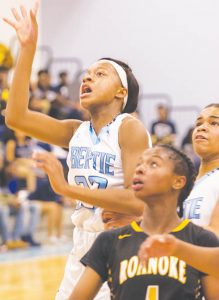 “Just to get out of this one feels great,” said a grinning Bertie coach Kelvin Hayes. “I knew they would come to play, and they really utilized their speed on us.”

But Bertie was patient, and it paid off, especially at the free throw line, where the Falcons made 12-of-21 free throws in the second half; seven-of-ten of those thanks to senior guard Jomiya Early.

“The jump shots weren’t falling, so we started attacking the basket and getting to the free throw line,” Early said after the game.

Carlisa Spivey had her best game of the season and one of the best of her prep career: a double-double of 16 points and 14 rebounds.

“I wanted to get to the fourth round so bad, because we’d never made it past the third as long as I’ve been here,” said Spivey. “I wanted to make a difference and make it pay.”

It was a decidedly physical contest with seven fouls whistled between the two teams in the first four minutes of play.  Bertie took an early 8-4 lead, but Roanoke Rapids came back and took a 9-8 lead thanks to Vann.  However, the Jackets’ effort at the foul line was lacking: only going 5-of-10 during that same span. Early and Dwaunti Combs got lay-ups to make it 12-9, Bertie, but the Jackets tied it on a three by Vann before Autum Morings’ free throw gave Bertie a one-point lead, 13-12, after the first.

Spivey’s second three-pointer of the game, coupled with a Combs lay-up off a turnover, and another trey from Nyasia Barnes, gave Bertie a nine-point lead, 21-12.  But Bertie had so answer for stopping Vann.  However, they did offer a better defensive effort on her other teammates thanks to switching defenses.  Bertie’s lead never fell below six points as Vann continued to grind it out for the Jackets, but Spivey and Morings – with 27 rebounds, total, between them – aided the Falcon defensive effort.  Often Vann got off just one shot and when it missed, the Falcons were off and running.  Bertie led by six at halftime, 29-23.

Spivey opened the second half with a triple, but Roanoke Rapids – more specifically, Vann – reeled off seven in a row to get within two at 32-30 before Hayes called a time out.  Out of the break, Early drained her first and only three-pointer of the night to push the lead to five.  Back came the Jackets on a Vann running lay-up and free throw and it was a two-point game again, 35-33. However, the Jackets scoring sputtered after that while Barnes and Combs snaked their way to the basket for layups in the paint and Bertie led 40-33 headed to the fourth quarter.

Roanoke Rapids had no field goals in the first five minutes, but their physical play sent Bertie to the foul line.  Morings and Early converted at the stripe, and it was 45-33, Bertie.  After two more free throws by Morings – who did not score from the floor the entire game – Bertie hit a cold spell at the line, missing their next five, but still maintaining a 10-point lead.  Vann’s backcourt mate, Alizae Neville, fouled out with less than three minutes to go, scoring just three points.  After Spivey’s lay-up made it 49-39, the Jackets got one more score as Bertie closed it out making five-of-eight at the line to win by 15.

“Turnovers and free throws,” lamented Whitmire. “We missed enough at the line to have won this game.”

Bertie now faces Bartlett-Yancey, today (Tuesday) at home, for a chance to play Saturday in Fayetteville for the eastern 2A championship.

“I think we can go all the way,” said Akia Jordan. “I really believe now that we can win it all.”

CHARLOTTE – The top free-throw shooting team in the conference couldn’t get them to drop when they needed them. Livingstone... read more