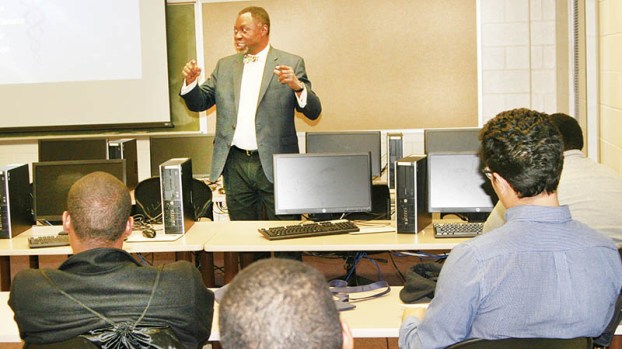 A group of Roanoke-Chowan Community College students listen to a lecture on health and wellness from local physician and surgeon Dr. Eduoard Misse of Vidant Roanoke-Chowan Hospital. Misse’s briefing was part of RCCC’s “Men Building Leaders” one-day conference for students and the community. 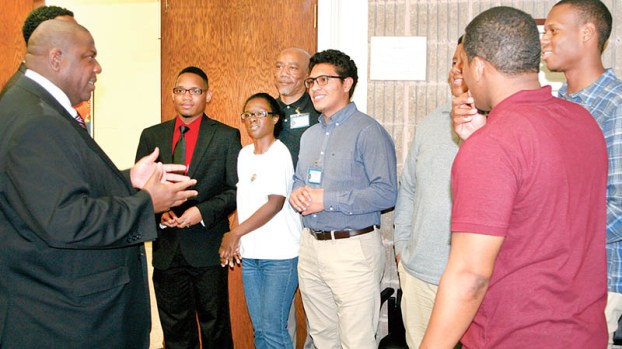 RCCC students, men and women, summarize what they learned at the college’s leadership conference in a chat with college President Jimmy Tate (left), who wanted the conference at a small venue like the community college rather than in a more urban environment. | Staff Photos by Gene Motley

UNION – New Roanoke-Chowan Community College president Dr. Jimmy Tate wants to do more than just increase enrollment at his institution; he wants to retain current students, and he wants to see them graduate.

That was part of the message Tate hoped to get across in a one-day symposium at RCCC entitled, “Men Building Leaders”. It featured not just local speakers in the fields of law, health care, and law enforcement; but also nationally-renowned motivational speakers and representatives from within the state Community College system as well as from other UNC system campuses.

The idea was not just to mentor specifically to RCCC students – male and female – but also to others within the community; and hopefully, inspire some of those attendees to turn that knowledge and become counselors themselves.

“Whether its low-income white males or minority males, you hear so much about the drop-out rate where if you get them in college they become early leavers,” said Tate. “So rather than talking about it, I suggested we do something.  Instead of driving to Raleigh, I wanted to have it (the symposium) here in Ahoskie and we would sponsor it.”

“I want to show our students that you can achieve, go on to do great things, and still come back home and serve your community,” he added. “It gives our students real-life examples and hopefully moves things from talk to action in keeping minority males enrolled here at our college.  I’m fortunate our staff came together to lead this initiative.”

Vice-Chancellor Dr. Barry Burks with Research and Economic Development at North Carolina A&T State University in Greensboro led off the speakers. After each session, participants were divided into roundtable discussion groups for more one-on-one interaction with one another as well as the guest speakers.

“The idea was to talk a little bit about how to be successful,” said mid-day speaker, Tawan Perry.

A community college drop-out, Perry says he overcame his odds with persistence, eventually graduated, and has become a nationally-recognized author and motivational speaker who believes advice, ideas, and resources are the keys to unlocking college success.

“I told them they have to overcome a fear of failure,” he noted. “You can bounce back if you surround yourselves with the right kinds of people and that’s one of the reasons people don’t succeed: they’re around the wrong kinds of people.”

Perry cautioned his audience to not just be studiousMonday-thru-Friday and then change on weekends.

“Too many people are caught up in our prison system, not because they’re bad people, but because they made a bad decision at the wrong time,” he added. “That was almost me, growing up in Rocky Mount and later in Maryland.”

Perry is the author of “College Sense”, which he describes as a how-to guide to understanding the college experience.  Its premise is creating opportunities for professional development, and freeing one’s self of unwarranted prejudices and feelings of inferiority.

“I hope the information I disseminated to this audience today is something they can use not just everyday as future fathers, future politicians, and future business owners, but also equipping them for passing on that to the next generation that follows them,” he concluded.

Kedrien Manning of Winton, a Hertford County High School graduate and current RCCC student majoring in Fine Arts who also participates in the college’s Male Mentoring Program, said he was inspired by the day’s undertakings.

“I’m a mentor and a mentee,” Manning says. “I enjoy the program not just as a participant, but also as someone who wants to help out.”

“This has given me ideas on how to work hard, get myself together, work on my skills, and to get what I want,” she said. “I want to one day open my own day care, and this is helping me and my confidence.”

“It’s nice to see our male students get more involved and learn how to unleash their full potential,” said RCCC Student Government president Dezimber Sawyer. “I’m so glad they hosted this event on our campus.  This shows they can be more than what little ol’ Hertford County has shown them; and it’s been fulfilling for me to watch them and to have been a part of this.”

“This wasn’t just male-building,” said SGA Treasurer Kanesha Harris. “2017 is building female leaders like they’re building men for leadership and that’s what today has been for: building up.”

The afternoon speaker was Interim Chancellor Dr. Johnson Akinleye of NC Central University in Durham who used his talk to revisit all the components of the day’s conference.

“The reason we put so much emphasis on black men is because they are really an endangered species,” Akinleye suggested. “Everyone needs mentoring, and if we encourage them to get in school, and then stay in school, this does a lot to keep them out of trouble and become productive students.  We have to do more work.”

Akinleye says RCCC has an advantage with its rural presence and rural roots.

“One of the aspects is less crime,” he stated. “Men in urban areas have no jobs and little hope.  They feel they have to make money in the streets, and that leads to trouble.  Here, most kids come from extended families, they’re close to their families, and that helps keep them grounded.  Urban areas don’t have that type of family connection anymore.”

The chancellor said another advantage community college students have is already being a part of the work force as well as dwelling in academia.

“If kids go to school, and stay in that area, they will contribute more to that area,” he said.

Akinyele also came to promote the “Two-Plus-Two” program.  It’s a system, still in the idea phase, where community college graduates can go straight in the next two to three years into accelerated study right at the college instead of traveling to a four-year institution.

“Whether it’s criminal justice, nursing, etc., they never have to leave this area, and they will be more willing to remain in this area,” Akinleye concluded.

The event concluded with an evening dinner and speaker Rev. Dr. Jamal H. Bryant, a Baltimore author and minister.  Bryant spoke on life after college and then participated in a question-and-answer session.