Smile at the birdie!

Afterward, first-year coach Kelvin Hayes was all ‘coach-speak’ in trying to motivate his team for tonight’s (Thursday’s) second-round opponent in Warren County.

“Defensively, our press wasn’t that good because they beat it rather easily and I wanted us to be a little more fluid on offense,” Hayes said. 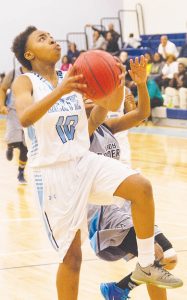 Bertie’s Dwaunti Combs (#10) outraces a Southern Vance defender for a lay-up in Tuesday night’s NCHSAA 2A girls state playoff game. Combs had a career-high 10 points as the Lady Falcons easily won their opener over the Lady Raiders, 72-30. | Photo by Angie Todd

Hayes may also have been speaking through the frustration of what looked for a while like a season-ending injury to conference “Player of the Year” Akiya King, who went screaming to the floor with a knee injury and had to be carried off on a gurney. Her availability for the next game is unknown.

“It just means we’ve got to have everybody coming together,” he stated.

Overall, though, Hayes’ ladies gave him plenty to smile about as Morings, King, and Spivey shot Bertie out to a 7-0 lead. It was 15-8 when Akia Jordan’s three-pointer gave Bertie a 10-point lead.

But it was less than a minute later when King crumpled to the floor after a hard foul by Vance’s Ayeshia Teasley. After stoppage of play for several minutes King was whisked away to nearby Vidant Bertie Hospital for more evaluation, as her teammates led it, 19-8, after one quarter of play.

The Lady Falcons went to their patented press for a couple of quick baskets off turnovers by Nyasia Barnes and a nifty lay-up from Spivey, making the score 25-8, Bertie.

Dwaunti Combs came off the bench and subbed for King at the shooting guard spot and filled in admirably; draining a trey for her first points of the game. When Morings hit a short jumper with less than two minutes left, Bertie had a 20-point lead, 37-17. Later, Combs got the final shot of the half that staked the Falcons to a 44-17 lead at halftime.

The girls must have had King on their minds coming out of the locker room for the second half, because they defended the Lady Raiders with a vengeance: allowing just two points in the third quarter. Meanwhile, Morings made four straight lay-ups off turnovers to finish her night, and it was 56-19, Falcons. Shanidra Outlaw’s two free throws made it 58-19 headed to the fourth quarter.

Hayes cleared his bench in the final frame as the game-clock ran constantly under the 40-point rule once Jordan’s triple made it 63-21. Aleeyah Proctor – up from the junior varsity – helped close out the Raiders; and, ironically, it was Combs with the final Falcon points of the night, a three-pointer that sealed a 42-point win.

“As a team we haven’t shot it that well all season and tonight was more of that,” said Hayes. “But now we know its one-and-done.”.

Bertie (26-1) will now host the 22-5 Warrenton Lady Eagles tonight at the Bertie High Gym, hoping to move a bit closer to a state title.