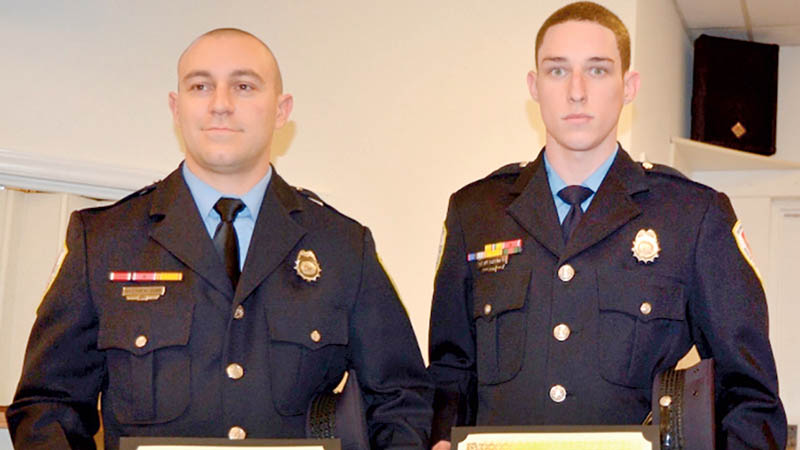 Hertford County native Clay Barmer (right) and Matthew Dube were honored earlier this month for their life-saving efforts while working a shift with the Roanoke Rapids Fire Department. | Photo courtesy of rrspin.com

ROANOKE RAPIDS – With a father and brother working in law enforcement, Clay Barmer was destined for a life of public service.

However, Clay’s route took him in another direction and an individual in Roanoke Rapids can thank Barmer and his partner for saving their life.

Barmer, a 2013 graduate of Hertford County High School, works as a full-time member of the Roanoke Rapids Fire Department (RRFD).

On Jan. 12, Barmer and fellow RRFD member Matthew Dube responded to a call in the Hinson Street area of Roanoke Rapids. There, the duo administered CPR on a person that had apparently gone into cardiac arrest.

According to RRFD Chief Stacy Coggins, the two firefighters were able to resuscitate the patient prior to the arrival of Halifax County EMS. The patient had a steady pulse upon arrival at Halifax Regional Medical Center (HRMC).

For their efforts, Coggins recognized Barmer and Dube at a Feb. 7 meeting of the Roanoke Rapids City Council for administering life-saving CPR.

“My partner and I work real well together as we were able to save this person…all the training we have had came in handy that day,” Barmer told the Roanoke-Chowan News-Herald.

“Some say it’s an honor to be recognized for your work,” he continued. “Some say you’re a hero. I didn’t take this job for any honor or glory. Matthew and I were just doing our job that day, just like we are trained to do. We were fortunate enough to arrive on the scene quickly and perform CPR.

“Some you’re able to save, and then there are times and situations where, despite your best efforts, you’re not able to save a life,” Barmer added.

However, it appears this isn’t the first time that Barmer has used his training to save a life.

At the City Council meeting where Coggins recognized the duo, the RRFD Chief noted that Barmer always seems to be in the right spot at the right time.

“That was the third call for Barmer in which he performed CPR on a patient and the patient was able to have a pulse before arriving at HRMC,” Coggins said.

Barmer, age 21, is the son of Jimmy and Sheree Barmer of Hertford County.

He initially found employment as an EMT with MedEx of Ahoskie and then with Bertie County EMS, where he still works part-time on his days off from the RRFD.

Barmer got his start in firefighting five years ago as a volunteer with the Ahoskie Fire Department.

“That’s all I’ve ever really wanted to do….be a fireman,” he said. “When I was hired as a Firefighter II and Emergency First Responder in Roanoke Rapids 10 months ago it was like a dream come true.

And, it appears with his grand total of three life-saving calls over a short 10-month period, Roanoke Rapids is lucky to have him as well.