MURFREESBORO – The Chowan University women’s basketball team used a balanced attack to beat #8 Virginia Union University 83-79 in their final regular season game of the year. With Saturday’s win Chowan pulled off the home and away sweep this season of one of the top women’s programs in the nation. They also earned a share of the CIAA Northern Division crown and earned the division’s number-one seed headed into this week’s CIAA Tournament in Charlotte. 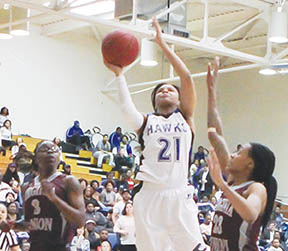 Courtni Williams led Chowan’s offensive attack Saturday with 16 points, scoring seven of the Lady Hawks’ final nine points and helping put the game away with a key three pointer with under two minutes to play. Shaikeyla Jordan posted 12 points while Mariah Coker and Danielle Weldon each chipped in 11 points. Chantel Roberts drained three, three pointers in the game and came away with 10 points.

Chowan trailed 22-18 after the first quarter but never got more than eight points behind. The Lady Panthers took a narrow 43-41 lead into the halftime break. The Hawks battled to stay within striking distance of VUU the entire second half.

Chowan spread the offensive attack in the game with ten different players putting up points. Chowan’s defense forced 15 Lady Panther turnovers which they converted into 19 points in the game.

The Hawks tied the game at two different points in the final four minutes of play and took the lead with just under two minutes to play on a Williams lay-up. Jordan Payne then hit two key free throws with just over a minute to play to help spread the lead to four points at 83-79. The Hawks defense did the rest, holding off Virginia Union until the final buzzer.

Chowan hit 46 percent (30-66) from the floor in the win. Virginia Union hit shots at a 43 percent clip and were led by Brittany Jackson, who scored a game-high 25 points.

Chowan finished the regular season 17-9 overall and 10-6 in the CIAA. Their 7-3 CIAA Northern Division record is good enough for a tie for first place in the division with Virginia Union and Virginia State.

Chowan defeated Virginia Union in both meetings this season; so, while the Hawks split victories with Virginia State, the Trojans were downed twice by Virginia Union, therefore, Chowan is awarded the No. 1 seed.

The Hawks thus earn a bye, and will not play until Wednesday when they meet the Shaw-Lincoln winner in the 12:01 p.m. game at Bojangles Coliseum.

ELIZABETH CITY – After winning twice thanks to four overtimes, Hertford County was hoping to avoid another extra period of... read more