ELIZABETH CITY – Bertie High’s girls basketball team let Pasquotank hang around until the second half started, then they went to work solidifying themselves as one of the top 2A teams in the East headed into the post-season.

Nyasia Barnes continues to close the season with some welcome offensive punch as she led the scoring with 15 points, while Akyia King added 14.  Autum Morings, who missed Wednesday’s semi-final against Edenton in Ahoskie, returned and scored seven points. Dazia Williams had 13 for Pasquotank.

The win earned Bertie its highest seeding in the school’s history with the number-one overall seeding in the East.  The Falcons get three home games, if they keep winning, all the way up to the East semi-finals.   Bertie opens Tuesday in Windsor against Southern Vance. 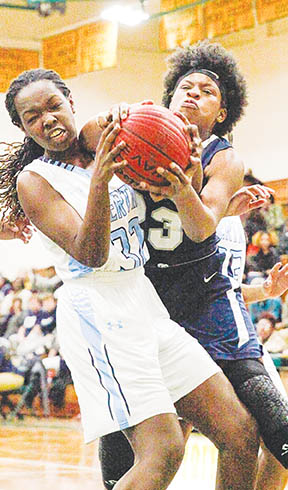 Saturday’s league title game looked like it might be a rout when Bertie led first at 4-0, then outscored the Lady Panthers 8-3 to carry a 12-3 lead into the second quarter of play.

Pasquotank re-grouped as the quarter began with an 8-2 run of their own to pull within three, 14-11.  King, who had been shutout in the first period, got a put back and a three-point basket to re-up Bertie’s lead to 17-11.  But back came the Panthers and when Kennedy Griffin nailed a trey it was a two-point game, 18-16.  A pair of foul shots by Williams got Pasquotank within one, 20-19 before Jomiya Early’s free throw sent Bertie to the locker-room ahead, 21-19.

Amaya Simpson got a lay-up off a Bertie turnover to open the second half and Pasquotank had come all the way back to tie the game at 21-21.

But that may have been the impetus the Falcons needed.

Bertie reeled off a 17-2 run in blitzkrieg style with their pressure defense forcing turnovers that became easy lay-ups.  No one player led the assault as the Falcons upped the margin to 17 points, 40-23 before Pasquotank got a rebound and a bucket before the buzzer and trailed by 15, 40-25, headed to the final quarter.

Pasquotank kept rushing and their quickness played right into Bertie’s hands.  The Falcons got physical and started muscling up their game with low-post play.  The Panthers couldn’t match Bertie’s size and it turned into a rout that became a 19-point win to the title.

Bertie also picked up some hardware for the school’s trophy case as the Falcons’ King was named as league ‘Player of the Year’, while ‘Coach of the Year’ honors went to Bertie’s Kelvin Hayes, in his first year of coaching girls basketball.