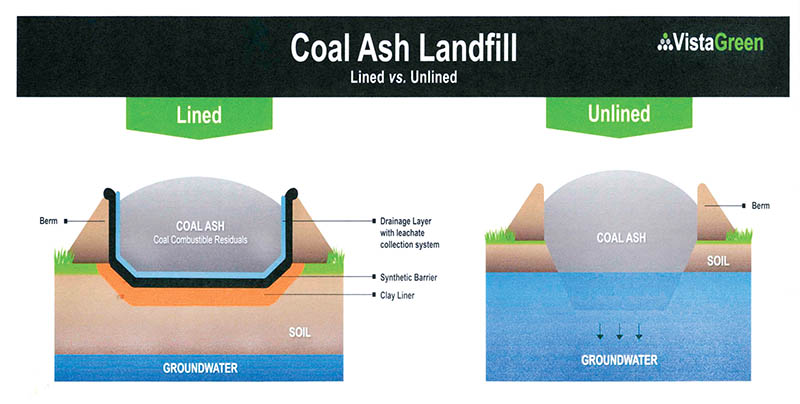 VistaGreen officials stress that the public needs to be aware that a lined coal ash landfill (left) is the key to protecting the groundwater below it rather than the old method of using an unlined landfill (right). | Courtesy of VistaGreen

SEABOARD – Delayed, but not deterred – those are the sentiments of a father and son as they rally to overcome a level of distrust and misinformation over plans to build and operate two coal ash landfills in Northampton County.

Clarence Mann is the majority partner in VistaGreen, a Raleigh-based company seeking to turn over 800 acres of land off High Bridge Road between Seaboard and Margarettsville into a site that will accept, store and recycle coal ash.

On Jan. 17, Mann’s partner in the project, C. Wood Beasley III of Colerain, filled out an application for a special use permit to construct two lined landfills on land purchased by VistaGreen in December of 2015.

At a regularly scheduled meeting of the Northampton Commissioners on Feb. 6, Beasley formally withdrew that application. In a telephone interview with this newspaper that afternoon, Beasley said his actions were based on “misinformation being spread around the community” about the project. 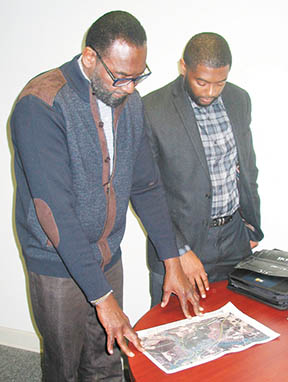 Clarence Mann (left) and his son, CJ, study a map of the proposed High Bridge Park off NC 186 in Northampton County where they hope to construct two coal ash landfills. | Staff Photo by Cal Bryant

On Thursday of this week, Mann, joined by his son, Clarence Jr. (CJ), came to the R-C News-Herald office to discuss the future of the project. Both father and son vowed to move forward.

“We needed some time to clear up some misconceptions, some misinformation, about this project,” stated Mr. Mann when asked about withdrawing the permit application. “We can reapply for the same permit at any time, but for right now we’re using this delay to perform advocacy work in the community. I’m the majority owner; I need to be out front, the face of this project, and let the citizens know the facts about this project.”

CJ Mann stated one major misconception is that VistaGreen purposely targeted a low income, minority community in which to develop and operate the landfills.

“It wasn’t because of the social, economic conditions of the community,” he remarked. “This could have been in Charlotte, Raleigh, Wilmington and still be deemed as safe. We chose this particular site because of its size, the layout, the soil type, and the access to rail service.

“It wasn’t until after we found this particular tract that we learned Northampton is a Tier 1 county with a high level of poverty. But we didn’t choose this tract because of that,” he added.

CJ Mann continued by saying, “We know this is a sensitive issue. We know we will be questioned about social and environmental issues. As a father-son minority team, we don’t want to do anything to hurt this community.”

Clarence Mann touted the fact VistaGreen can benefit from today’s science and technology to make these types of landfills safe.

“When we had our (public) meetings in Seaboard a few weeks ago, I got a feeling that those in attendance didn’t understand about how our landfill is totally different from any of those old, unlined sites – from 50, 60, 70 years ago – that were built long before today’s technology. Those sites failed and leaked. Plus, all those old landfills were built near rivers. The technology back then was dig a hole and throw the coal ash in the hole,” he said.

“The coal ash landfills of today, to include the ones we’re proposing, are built to current EPA (Environmental Protection Agency) codes. In the past there were no such regulations,” chimed in CJ Mann.

The father added that while he and his partner were in the business of making a profit, this project was much more than personal financial gain.

“We’re here as a business, but we’re also here to help this community,” Mr. Mann said. “Northampton County benefits financially to the tune of almost $2 million per year….$920,000 in tax revenue and the host fee/franchise fee we pay the county (to operate the facility) is $1 million per year.

“There are also ancillary jobs that come with this. We’re got to maintain this site for 30 years….it’s over $50,000 per year just to cut the grass,” he continued. “We’ll have 75 people working there every day and there’s no where to eat breakfast and lunch. Someone could bring in a food wagon and be very successful. We’ll have office space there, so we’ll need to hire a cleaning crew.”

Mann also mentioned that local businesses, existing or new, could profit on the mechanical upkeep of the fleet of trucks used at the site….tires, gas, oil changes, mechanic work, etc.

“We didn’t address those ancillary jobs when we held our public information meetings. These jobs will be important to our operation. They will help the community thrive,” Mr. Mann said.

Both father and son stressed that the science and the technology are firmly in place to ensure that the landfills are safe for the local community.

CJ Mann produced documents from the National Weather Service’s assessment of the historic 500-year flood that drenched parts of South Carolina after over 23 inches of rain fell between Oct. 1-5, 2015. Among the areas of the Palmetto State impacted by that deluge were Cope and Eastover, SC.

“The engineering firm that designed the coal ash landfills there (Cope and Eastover) is the same one we’re using here in Northampton County,” he noted. “Despite one of the worst-ever rainstorms ever to impact South Carolina, there were no problems with those landfills.

“I’m very confident that should anything of that magnitude come here, the design and safety features of these landfills can stand up to the elements,” CJ Mann added.

Clarence Mann stressed those types of scenarios are exactly why several monitoring wells are part of the design at the Northampton site.

“They encircle the site; by state standards they are supposed to be tested for water quality twice a year, but we promise to monitor them once a month,” he remarked. “If there is any type of problem, the monitoring wells will catch it and we can immediately address it and fix it.”

Mann further explained that when the liner is initially laid on top of a three-foot compacted clay barrier (before the first load of coal ash is dumped), they are heat-sealed and then pressure is applied to ensure they do not leak.

Additionally, each landfill contains a drainage layer with a leachate collection system. CJ Mann said that layer collects surface run-off water and directs it to one of several lined holding ponds.

Based on projected annual volume of one million cubic yards of coal ash, both landfills will be filled and capped (using the same type of liner) in 12-to-15 years. However, as mentioned earlier, VistaGreene is required to have staff on location for another 30 years in an effort to continually monitor the site.

“We have to put up a performance bond to ensure our responsibility to monitor and maintain the site for a full 30 years after it reaches capacity,” Mr. Mann said.

Both men stressed that the liners are durable and will not break down, physically or chemically, under the weight of the coal ash.

“This a very durable, synthetic liner,” Mr. Mann noted. “Imagine just a piece of everyday plastic placed in the ground. You can go back 100 years later and that plastic has not bio-degraded. If a simple piece of plastic can last over that number of years, this liner certainly can as well. The coal ash, chemically, will not bio-degrade the liner.”

CJ Mann spoke of how this facility has the potential to be a “win-win” opportunity for both VistaGreene and Northampton County.

“Their (the county’s) win has got to be greater than our win,” he said. “For one, coal ash continues to be produced as a byproduct of a coal-fired electric generation station and it has to be stored somewhere. We know this issue has upset some people in the county. It’s hard to try to get your point across, to let them know the true facts behind coal ash storage in a lined landfill rather than one unlined, when people are upset.”

“I believe the biggest concern of the citizens of Northampton County is they do not understand the technology, they are under the impression that they leak, will contaminate the groundwater, and will poison them,” remarked Mr. Mann. “That’s not the case with lined landfills.”

Another concern, he said, was air quality with the dust generated during the process of unloading the coal ash from rail cars.

“Our engineering plans include an enclosed building where the rail cars and brought in and the coal ash is unloaded into a holding pit and is slightly wet down,” Mr. Mann noted. “That controls the dust.”

CJ Mann addressed a falsehood that VistaGreen was engaged in a conspiracy with county officials, the railroad company, and state environmental officials in order to hammer the project through.

“That’s not the case,” he said. “Everything is being done above board, but there is a certain level of distrust in the community that we must overcome in order to move forward.”