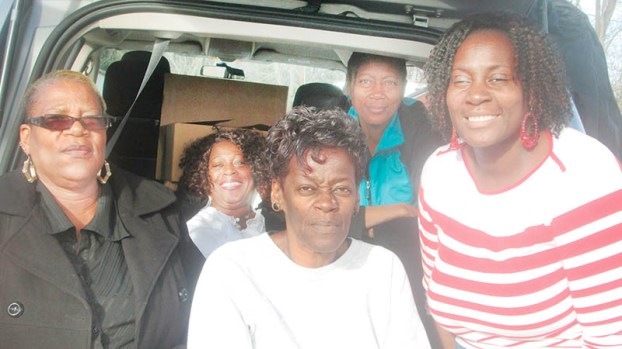 Sisters Cinder Allen, Shirley Walker, and Nora Capehart (front row from left), along with – back row from left - Cynthia Harrell and Sheila Futrell are shown preparing to deliver food boxes to the needy, part of a legacy handed down by their late mother Bettie Moore. 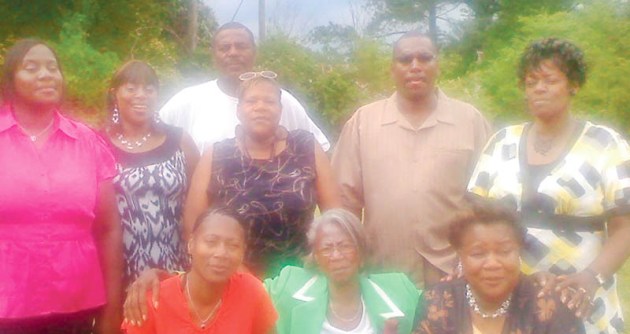 Mother Bettie Moore, affectionately known to family and friends as “Gail”, was a missionary in her own right and served those around her with her whole heart.

Additionally, a servant leader per the above-noted author, “creates value for the community by consciously and intentionally giving back to the community.”

As asserted by Northouse as he echoed Robert Greenleaf who was responsible for coining the term servant leadership, “a servant leader has a social responsibility to be concerned about the have notes and those less privileged.”

Moore earned the title as Servant Leader by her actions, deeds, and love in which she showed to everyone whom she was in contact with.

Her service to the community was initiated approximately 50 years ago in response to a longing in her heart to give back to others who had helped her and her husband, John Moore, with providing materially for their children. As far back as the children could remember, they had fond memories of their mother providing food and clothes for others in the neighborhood.

As stated by one of her daughters who reflected her mother’s days of working at Perry Wynn’s Fishery in Colerain, she would bring fish home for her family as well as at least three other families in the neighborhood. Two of her other daughters reflected on instances when in the early 1970s their mother was informed by an employee of Choanoke Area Development Association (CADA) of NC’s that clothes were available for those in need. With that information she started driving to Murfreesboro to pick up clothes and then distribute them not only to the nine children she gave birth to, but also to the additional daughter in her home in which she adopted, and to other needy families in the Colerain area.

In 1979, Moore, her husband, and her children relocated to Ahoskie to a white two-story house, down a long path, with a barn in the back yard; she couldn’t have been happier because she could utilize the barn to store the clothes for those in the community. This ministry was so important and needed that families traveled from Colerain to Ahoskie to visit “the barn at Ms. Gail’s house” to get clothes. Shortly after this relocation to Ahoskie, families in Ahoskie were introduced to this clothing ministry and people would often travel down the path to this barn to get clothes for their families.

One of Mrs. Moore’s granddaughters met an elderly lady in the neighborhood and instantly when this lady was informed that “Ms. Gail” was her grandmother, she immediately stated, “I don’t know what I would’ve done without your grandmother. I traveled down that path plenty of days to get clothes so that my children would have school clothes.”

In addition, to a clothing ministry, Mrs. Moore would deliver boxes filled with turkeys, chickens, hams, canned food, rice, and other non-perishable items as well as house coats, bedroom shoes, fruit baskets and other necessities to the elder and/or needy in the community. 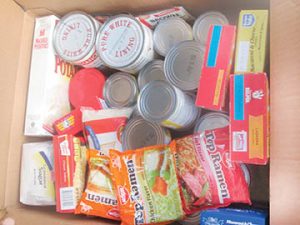 Shown here is just one of numerous boxes of food that was delivered during Christmas of 2016 to a needy family in the R-C area. Other items delivered included hams and turkeys.

Being further prompted by God she was led to do more and after talking with her pastor, Bishop Valeriano Melendez, she called a family meeting to share her vision, which birthed The Elderly Club. This vision was funded by her children who gave $60/per person and the grandchildren who gave $30/per person to ensure that there were sufficient financial resources to fulfill her heart’s desire to bless the community.

Moore had three main mottos to teach sharing, cleanliness and leadership/character which were: “No matter how little you have, you have enough to give. Don’t ever say that you don’t have enough to share with anybody because if you only have one biscuit, you can break that in half and you keep one half and give the other half to someone else”; “If you only have a bed and a chair, you make that bed and you place that chair”; and, “You’re not responsible for how people treat you but how you treat them.”

Although Mrs. Moore passed away June 14, 2014, her legacy continues through the living four generations who are just as passionate about serving others and keeping her name alive. Mr. and Mrs. Moore were the parents of nine children: Jannie Moore Burden, Shirley Moore Walker, John Moore, Clifton Moore, Cinder Moore Allen, Cynthia Moore Harrell, Nora Moore Capehart, Sheila Moore Futrell, and Clarence Moore (who preceded her in death in 1994). They raised two of their grandchildren, Toney Moore and Travis Moore, as well as their adopted daughter Bereatha Vinson whom they opened their home to when she was 7 years of age.

In Moore’s honor, the family continued with food distribution during the 2015 Christmas holiday in which 20 families were blessed with boxes filled with treats and love. In 2016, the family distributed food boxes to 25 families. One of her daughters reported that when she delivered the box to one home, the person was so in awe and said, “I was just talking about Mother Moore this morning and how she used to be a blessing to everybody. This food box is a blessing to me.”

In an effort to continue the vision for 2017, the family will be sponsoring several fundraisers, one being A Rainbow Tea Celebration of Love at 1 p.m. on Saturday, March 18 at St. Thomas Episcopal Church in Ahoskie. If you would like more information on this event, if you were blessed by Ms. Bettie “Gail” Moore, or would just like to help a family provide humanitarian aid in honor of their loved one, please contact Mrs. Nora Moore Capehart, daughter of Ms. Bettie Moore, at 252-332-6733 or 252-287-3109.

(The author of this article, Evangelist Lakeisha Walker, M.A., LPC, is a Regent University Candidate of Doctoral of Strategic Leadership, and Leadership Coaching Concentration. She is a granddaughter of Mother Bettie Askew Moore.)