WINDSOR – Bertie High’s seven seniors had plenty to celebrate Friday night as they closed out an undefeated Northeastern Coastal Conference season with a 54-41 win over rival Hertford County.

Nyasia Barnes led the Lady Falcon effort with 12 points, while teammate and fellow senior Sha’Nidra Outlaw was selected as ‘Player of the Game’.  D.L. Watford led Hertford County for the second straight game; she finished with 14 points leading all scorers. 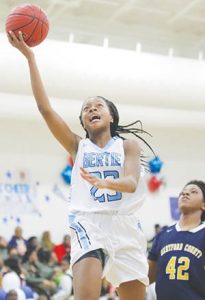 Bertie’s Nyasia Barnes (#23) scores on a lay-up in Friday night’s regular season finale. Barnes had 12 points to lead the Lady Falcons in a 54-41 win over Hertford County that finished the Northeastern Coastal Conference season at 12-0. | Dynamic Photo / William Anthony

Another Falcons senior, Autum Morings – who signed her letter to attend Cape Fear Community College earlier in the week – opened the scoring with the first five Bertie points for a 5-2 lead.  Barnes then hit back-to-back three-pointers while Outlaw closed out the first quarter with a lay-up for a 16-6 Bertie lead.

Carlisa Spivey hit a pair of free throws midway through the second quarter for an 11-point lead, 21-10, for Bertie.  Then Akyia King got a steal and snowbird lay-up that doubled the score, 24-12.  The ladies closed out the first half with three straight three-pointers as Bertie went to the locker-room ahead 32-17.

Akia Jordan swished a triple at mid-point of the third quarter for a 15-point Bertie lead, 40-25.  That trey became part of an 8-0 Bertie run to close out the quarter, led by five points from Jordan and staked the home team to a 20-point lead, 45-25, headed to the fourth.

After King banked in a soft jump shot, Hertford County hit three treys in a row – two by Watford and another by Mckenzie Deloatch that got the Lady Bears within 13 at 47-34.  At the 3:42 mark Destiny Chavis’ put back had Hertford County down 11; but Jomyia Early cashed in a three-pointer as Morings and Carlisa Spivey closed out the Bears with a 13-point win.

Bertie (23-1; 12-0, NCC) received a first-round bye in the conference tournament and will play their first game on Wednesday at Hertford County High’s gym against the Edenton-Currituck winner.  Hertford County (3-19; 1-11, NCC) closed out their season with a Monday night game at Pasquotank.