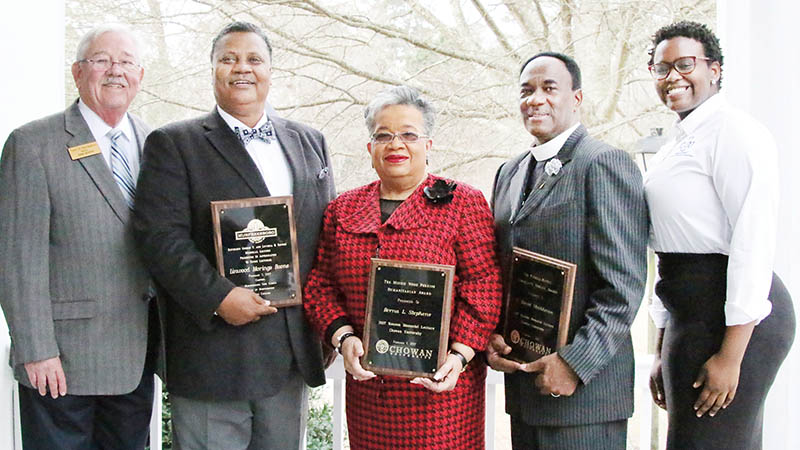 MURFREESBORO – Local members of the community were honored here Feb. 1 as part of the annual Rouson Memorial lecture, an event held in the McDowell Columns Building on campus.

Reverend Stackhouse grew up working in the hot tobacco fields of Fayetteville. As the son of a sharecropper, the only thing his parents were able to pass down to him was a fervent belief in a mighty God.

Answering the call to ministry in 1971 at the age of 17 Stackhouse was appointed to the Rossville A.M.E. Zion Church, Great Falls, SC; the youngest pastor in South Carolina. He earned his Associate of Arts degree from Clinton College, Rock Hill, SC, and his Business Administration degree from Livingstone College, Salisbury, NC. He then matriculated at Hood Theological Seminary on a full scholarship. By 1980, Pastor Stackhouse received his Bachelor of Theology and Master of Divinity. On the day of his graduation, he received the “Rural Pastor of the Year” award and the “Senior Preacher of the Year” award.

In January of 2009, Pastor Stackhouse was called to New Ahoskie Baptist Church where his evangelism transformed the church. He mentored in schools and evangelized the neighborhoods. To date, 401 converts have joined, and 121 candidates have been baptized. Under his leadership, the church has added a five-star summer day camp and an after-school tutoring program.

Stackhouse is the founder of “Right Moves for Youth,” a program for at risk students at Ahoskie Elementary School, and has been a champion for violence prevention by leading Unity in the Community forums in Hertford and Bertie counties.

He is the past recipient of the Hertford County Community Service Award, the National Order of the Elks Community Service Man of the year (first person east of I-95 to receive this award), and named by the League of Municipalities one of the most influential elected officials in the Roanoke Chowan area. He is the 1st Vice Moderator for the West Roanoke Baptist Association, community activist, association facilitator, and ushers facilitator. Pastor Stackhouse is also an elected member of the Ahoskie Town Council.

The Minnie Wood Perkins Humanitarian Award honors a woman who dedicated her life to the well-being of the community members and her family.

Reverend Stephens is a native of Murfreesboro. She attended North Carolina Central University and North Carolina A & T State University. After moving to Maryland, she became employed by the Social Security Administration where she received funding to complete her Bachelor of Arts in Sociology at Morgan State University. After 28 years of service, she retired from the SSA and returned to Murfreesboro in 1997 bringing with her numerous awards.

When Reverend Stephens was 10 years old, she was baptized at First Baptist Church Murfreesboro by the late Reverend George Rouson. Church continued to be an active part of her life. However, it was in 1987 at Morning Start Baptist Church in Catonsville, MD that she rededicated her life to Christ. She and her husband were both ordained as deaconess/deacon in 1995.

Upon returning to Murfreesboro, Reverend Stephens immediately reunited with First Baptist Church, and was called to ministry in 2007; ordained in 2010. She is the current Associate Minister at Jordan Grove Baptist Church, Vice President of the Pastor’s Aid Ministry, and chairperson of the Women’s Ministry. She also teaches adult Sunday School.

She is active and involved in civic and community affairs, currently the president of the C.S. Brown Cultural Arts Center, Co-chairperson of her high school class, Secretary, of Hertford Northampton Partnership for Children, Treasurer of North East Hertford County Minister’s Alliance and corresponding secretary of Hertford County Branch of NAACP, and President of West Roanoke Missionary Baptist Association Women’s Auxiliary. She also received the Hammer Award from Vice President Al Gore due to her commitment and dedication to implementing the Welfare Reform Act of 1996 to the Social Security Claims process.