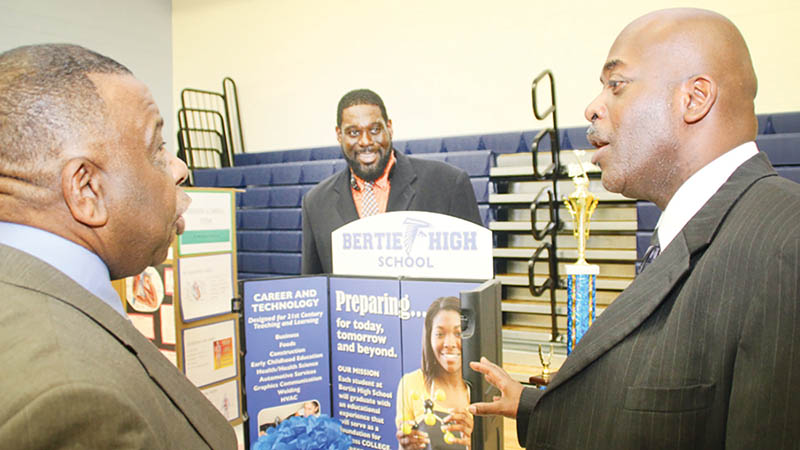 WINDSOR – They say when you’ve done something good, sometimes you have to forsake modesty and brag on yourself a little bit.

The crowd numbered nearly 1,000 as the stakeholders all united for one evening to celebrate accomplishment.  The evening began with a program honoring the top teachers and administrators at the county’s nine schools: Askewville Pre-K; Aulander, Colerain, West Bertie, and Windsor Elementary; Bertie Middle; along with Bertie STEM, Early College, and Bertie High Schools.  As each honoree was introduced they were welcomed to the dais with a round of thunderous applause.

Bertie STEM High School, which has already received national recognition, was celebrated for its “100 percent graduation rate”, while Bertie Early College High School was cited for a state performance grade of ‘A’.

“Basically, this is a night for us to shine, to show what’s going right in this county,” said Superintendent Dr. Steven Hill. “We’ve got teachers doing outstanding things and being recognized at the state level for achievement; some schools have had 100 percent graduation rate; some have moved up to ‘A’ standard.  We want people to come out and see these ‘high-end’ things that are wonderful going on, and to also see that we serve over 1,000 kids every day, we transport these kids every day, and I don’t think we ever stop and celebrate what we’re doing here in Bertie County and the effect of this collaboration with the community.  And that’s what this is, a celebration of the community.”

From the District’s Maintenance Department, which successfully completed 1,644 work orders last year; to the bus drivers who logged a total of nearly 5,000 miles daily transporting children; to cafeteria workers who prepare and serve 3,684 free meals daily, the District’s leadership did not want anyone working in any capacity to go unrecognized.

“This was an idea from Dr. Hill, where we accentuate the positive,” said a beaming Board of Education chair Bobby Occena. “Last year we had a student who went to West Point, and two years before that we had a young lady who went to Harvard.  Our STEM school is rated number-76 in the whole country and our Early College has been rated number-one in the whole state. But this is something the county needs to see.”

“This focuses on recognizing and celebrating the strengths of Bertie County Schools,” Hardy added. “The dedication, skills and accomplishments of students, faculty and staff will be showcased at individual school booths that we’ve set up in the gym.”

In addition to all nine schools represented at booths, there were also booths for ROTC, the Cadet programs (EMS and Corrections/Public Safety), and the Career/Technical Education (CTE) day and night classes welding program.

“It’s an opportunity for us to bring our community in and take a look at the things we’ve done in the District last year and what we’re doing this year,” said school board vice-chair Barry McGlone. “Everybody has at least moved up a letter grade and those who didn’t meet expectations a year ago have met them now; and these projects are excellent.  We want the public to see their efforts have not been derailed; that we’re doing the right things here.”

Organizers had hoped for a huge turnout, and the attendees did not disappoint.

Hill admits he has brainstormed – and barnstormed – all across the county to alert not only parents, but also non-parents, to these positive aspects of education and its cooperative effort with the community.

“That really is the backbone of what we’re doing here,” Hill stressed. “I’ve told my staff, you’re going to stop seeing the term ‘Parents Night’ and things like that over time, because we’re going to eventually phase that out and replace it with ‘Family Night’, because we understand it takes everyone to get behind these students and families of yesterday are not necessarily the demographics of today.  So the idea is let’s get them all out here and see the positive things that are happening, in a positive atmosphere, so that these (folks) can see what they’re doing are leading to something positive in their lives.”

As the crowd dwindled and parents, teachers, and students headed for their respective homes, Hill was left to ponder what the beginning of what he hopes will be a united effort will bring.

“That’s what we’re trying to get: the parents, the families, the leaders in this community, and our educators together because we’re too small to fail,” concluded Hill.  “We can be personal.”