WELDON – Police here have filed warrants and are looking for a Murfreesboro man wanted in a Sunday morning shooting.

Weldon Police Lieutenant Chris Davis said in a statement that Jahmel Kevon Faison, 25, should be considered armed and dangerous. 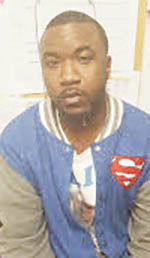 Davis confirmed town police are familiar with Faison, who has a February 22 court date for running from officers late last month after a vehicle he was a passenger in was stopped for speeding.

At this point the police department is not discussing motive in the shooting, Davis said.

Faison, who faces a charge of attempted murder, tends to frequent the Weldon and Murfreesboro areas and had a past address in Northampton County.

The shooting occurred at the corner of Second Street and Washington Avenue around 1:45 Sunday morning.

The victim was shot multiple times in the torso and hand and had been attending a birthday party at an establishment in the area of Second Street and Washington Avenue, police said.

The victim remains in critical condition, Davis said in the statement.