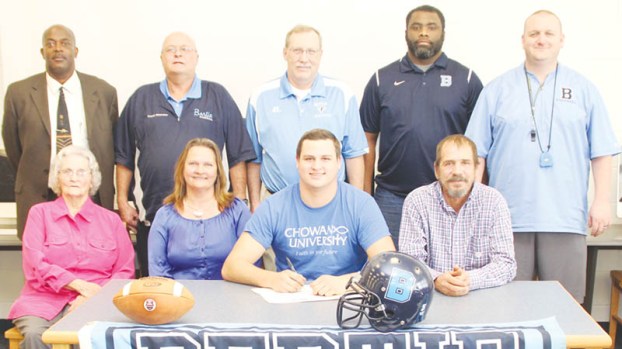 The preferred walk-on has actually been recruited by the coach who generally has offered the player a spot on the roster. The player isn’t offered a scholarship as a freshman but there is the possibility for one in the future.

Freeman, who played tight end and defensive end on the gridiron for the Falcons for two seasons, also plays on the Bertie baseball team.

This past season he appeared in 11 games and finished his career with nearly 100 all-purpose yards; over 13 yards receiving and 91 yards rushing with a pair of touchdowns as the Falcons went 5-7 and made the playoffs in 2016 under first-year coach Grantley Mizelle. Freeman, who picked the Hawks over Wingate, said he made up his mind quickly.

“I liked the program and the coaches were good to me, so it was an easy decision,” said Freeman at the Media Center during a “signing” ceremony on Wednesday. “They have three senior tight ends now, so I think my chances for season after next are pretty good. I want to work hard so I can earn my scholarship.”

Freeman, who says he plans to major in Exercise Science at Chowan, says he also wants to come back to Bertie and coach.

“I want to minor in coaching and I think I’ll definitely come back (to Bertie) to help; I won’t just be taking up space on the sideline,” he joked.

The Colerain native, who also plays infield for the Falcons baseball squad, says while he will concentrate on football in college, but he’s leaving the door open also to play on the Hawks’ baseball team.

“Lance has a great work ethic and a good attitude,” said Mizelle. “I’ve watched him grow and mature since he was small and I think he’ll do well. He wanted to stay close to home because his family means a lot to him and I think he’ll go there and do well. Coach Place is getting a really good ball player.”