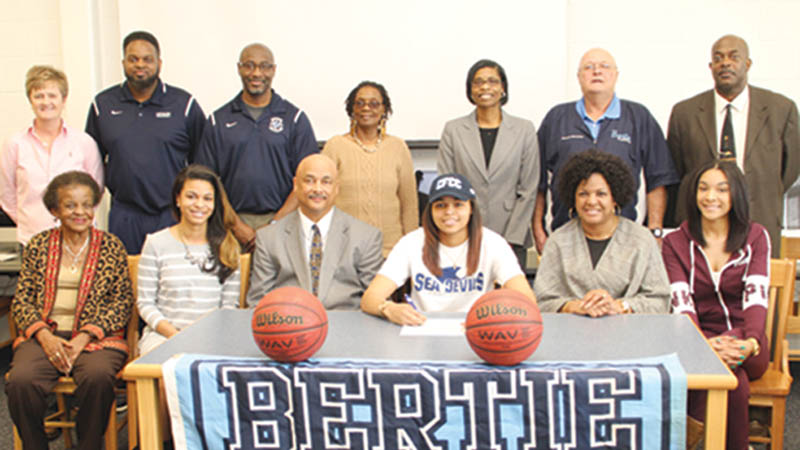 WINDSOR – Autum Morings is looking forward to a reunion.

The pair played together for the Lady Falcons in 2014-15.

This year Morings is averaging nearly 12 points per game and is in the top-10 in six statistical categories in the Northeastern Coastal Conference, where she’s helped the Falcons hold down first place with a record of 22-1. She leads the league in steals (5.2 per game), and is second in rebounding (10.1 pg) and blocked shots (2.0 pg), and is second in double-doubles with five. In two years of varsity basketball, she has been part of teams with an overall record, to date, of 27-3.

“They run the floor like we do here at Bertie, so that fits right into my style,” she adds. “I won’t be playing as much in the post in college, so I’m going to need to improve my energy and perimeter game. I plan to hit the weights hard, improve my frame, and be able to improve my jump shot, especially the “three”, because those are the big factors next year.”

Morings plans to eventually become a Physical Therapist and on the playing level wants to one day make it to an NCAA Division-I program, even though now that’s still up in the air.

“Autum has such an energy level,” says first-year Bertie girl’s coach Kelvin Hayes. “When she hits the floor she has such a motor, and she’s just so focused and relentless when she’s trying to get rebounds and steals. Defensively, her energy is always there, and she can shoot that mid-range jump shot.”

Autum’s dad, Bryan, is an assistant football coach at Hertford County High School and says this is a proud moment not only from a developmental standpoint, but also as a father.

“She thought about her options, and since she wasn’t getting the looks from D-I colleges she felt she should get, she took a different route in going to Cape Fear,” Morings, the father, said. “After she gets her two-year degree and polishes her game she says she’s going to play Division-One basketball somewhere. As a father and a coach that made me proud that first, she had the vision, and secondly, she’s always been one who works for what she wants.”

“This program (CFCC) produces a lot of D-I athletes,” Autum adds. “I want to make it to the ACC one day.”