MURFREESBORO – On Feb. 1 in the McDowell Columns Hall on the Chowan University campus, the annual Rouson Memorial lecture was presented by Reverend Dr. Linwood Boone who received the Rouson Award.

The event began with a special welcome from the University offered by Reverend Mari Wiles, Minister to the University. She acknowledged the opportunity and freedom we have to celebrate black history month. 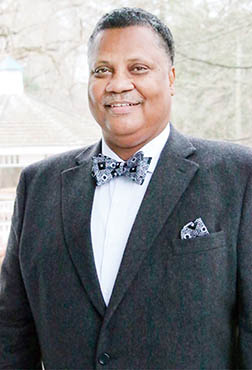 Following was a spirited and strong rendition of the “Star Spangled Banner,” led by Chowan University student James Conley. The opening music concluded with Miracle Ray leading “Lift Every Voice and Sing” with a contrasting high, smooth melodic sweetness. Both students were accompanied by Paula Pressnell, Artist in Residence.

Murfreesboro Mayor John Hinton offered a greeting from the Town. He referenced the Rousons, whom the lecture is named for, and stated, “Their legacy is one of unselfish sacrifice for our community. For over 40 years they shared their wisdom, their love, and their hope with the community; but most importantly, they shared that commitment with the youth, and they did so with humility, without prejudice, and without partiality.”

Student Government Association President Sierra Jones gave an enthusiastic presentation of the Rousons’s Biography. She recognized their tireless advocacy for education, as the Reverend was a principal and his wife, a teacher. She then continued to introduce the award recipients.

P. Michele Felton, Rouson family friend, introduced Reverend Dr. Boone, who gave his lecture titled, “Eli Williamston- The Shoemaker’s Son.” He opened jokingly to the student attendees, “I only have 39 things I want to tell you; however, I’ll probably only get to 38 of them,” acknowledging he did not want to make them late for class.

Boone continued with his dynamic presentation that undoubtedly engaged and interested the students present, even if based solely on his rhetorical style.

Boone spoke about the person who influenced First Baptist Church of Murfreesboro the most, Eli Williamston, thus influencing the Rouson family. Williamston was born in Hertford County in 1824. The Williamston family lived lives of contradiction.

“They were mulattos,” Dr. Boone explained, “and members of the original blue vein society.”

The purpose of this organization was to set the norm for those who were not “blue veined.” The blue veined were not white, yet not black either as they had heritage from both bloodlines; however, their skin was light enough to see the blue of their veins. They were often hated by white people and despised by black people because they were descendants of a black woman and a white man.

Despite this inherent prejudice displayed against Eli, he still had a positive attitude. His father was a noted shoemaker in Murfreesboro, and he could “work magic” designing and repairing shoes, as Boone explained. When he was still young, Eli was sent to work with a Quaker family; he felt the pain and sorrow of separation from his family, and yet he continued to display his good attitude. He was taught to read, write, and fish. Williamston distinguished himself as a seafaring person and eventually became Captain of the ship, Curlew. He became the first colored man to obtain a First Class License at the U.S. Customs House in Norfolk, VA.

Eli Williamston loved working on the Curlew, and he flourished; everybody wanted to hire him. He was a master sailor. He was so good, in fact, that when the Civil War broke out he was forced to work on a ship for the Confederate Army, under a watchful eye. He still maintained his positive attitude in a situation where many others would have given up. William A. Boone (the presenter’s grandfather) was a Union supporter who ultimately joined the Union Army, crossing paths with Eli on the Curlew.

Eli returned home after the war with one eye, broken bones and numerous other scars and effects of lost battles. He returned to Hertford County and developed a farm. He was a religious man, and went on to educate former slaves. He worked closely with Reverend William Reid (whose grandmother was the sister of the great grandmother of the presenter Dr. Boone) in the formation of the East Roanoke Baptist Mission Association of which Reverend and Mrs. Rouson so greatly benefited and supported.

“So, Henry Wadsworth Longfellow was right,” said Dr. Boone, adding, ‘The lives of great men all remind us we can make our lives sublime and, departing, leave behind us footprints on the sands of time.’ Eli Williamston, the shoemaker’s son, left footprints; footprints that we are looking at today.”

Boone closed his lecture in the same way he started, with a joke. “So, my minutes are up and I got a half a minute to spare.” Then encouraged students to remember, “A positive attitude can change your world.”

Mayor Hinton then offered Reverend Dr. Boone his award. The ceremony ended with the benediction by Sierra Jones.