WINDSOR – Despite concerns from citizens and the Bertie County Board of Commissioners, who requested a study of the intersection in question, the state Department of Transportation says a stop light will not be installed at the crossing of NC 11/308 in Lewiston-Woodville.

At the Commissioners’ monthly meeting Monday in Windsor, Division Traffic Engineer Jason Davidson said, based on the research NCDOT had conducted, a stoplight at the intersection was not warranted. 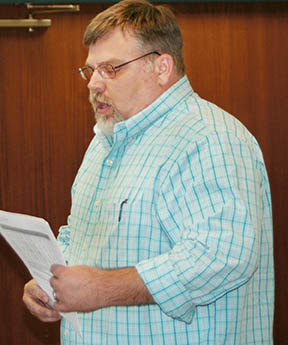 NCDOT Division Traffic Engineer Jason Davidson informs the Bertie County Commissioners at their Monday meeting in Windsor that based on studies and research, no traffic light will be installed at the intersection of NC 11 and NC 308 in Lewiston. | Staff Photo by Gene Motley

“Last year we came before you and heard comments on the pressing need for some improvements at this location, NC 11/308,” said Davidson.  “At that time we were discussing for a traffic signal, and it has been responded to.  But through the traffic counts and other data we pulled on the intersection, it has been determined that a traffic light was not warranted based on the Federal Highway Administration guidelines and recommendations.”

Davidson said despite the DOT determination, he was still seeking a way to make improvements at the crossing that serves as one of the main arteries for the Perdue Farms processing plant located on NC 308.

“In lieu of that (result), we decided that we would continue on to try to find some other means to mitigate the issues that we have here,” Davidson continued.

The engineer cited that while there had been no fatalities at the intersection within the past several years, there had been other severe accidents at the location.

“It’s one of those locations that has had a habitual problem,” Davidson noted. “Thankfully nothing has been extremely severe.  While there’ve been no fatalities, there have been other severe accidents.”

“This is some background information on what we are proposing, and where it was implemented with great success,” he reported. “Usually with these recommendations we see an 80 percent reduction in crashes, and it also decreases the severity of the crashes exponentially.”

The engineers recommend changing the intersection to a four-way stop pattern.

“Every direction approaching the intersection would have to stop,” he said. “You’re lowering speeds, everyone would have to stop, and you’re getting into a situation with the speed being controlled that there would be far less fender-bender crashes and stuff like that.”

Upon questioning, Davidson said a flashing, or warning, light would be installed to alert motorists of the impending 4-way stop.

“We already have a ‘vehicle-entering flasher’, so we decided that on the Highway11 approaches that those signs would be converted over to a “stop-ahead sign” blinking red that will flash all the time indicating there is a stop ahead,” he acknowledged. “The overhead flashing light that’s in the intersection currently would be changed to red all the way around.  We’ll keep that in place as counter measures to make sure this works.”

Commissioners’ chairman John Trent thanked the engineers for not only their recommendation of improvements at that intersection, but also for what they have done on in clearing the flood conditions on Indian Woods Road.

“This has been a great concern to the people of Indian Woods, to the people who travel Highway-11, those in the Snakebite area and to the public in general,” said Trent. “So we appreciate what you (DOT) have done.”

Davidson requested a resolution of support from the Bertie Commissioners.  Vice-chairman Ernestine Bazemore made the motion for the resolution, seconded by Commissioner Stewart White, and it passed unanimously.

WINDSOR – They want their slogan to mean “tough and resilient”, as much as moving forward in one proud body.... read more