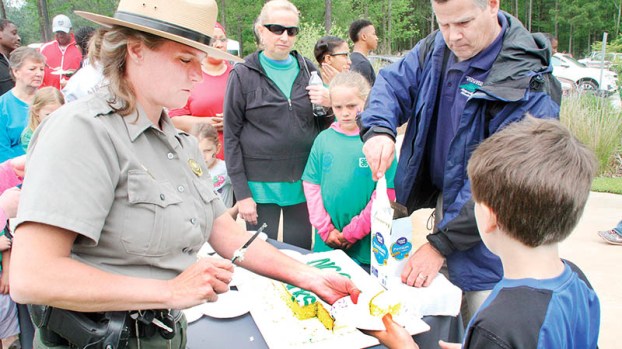 Joy Greenwood serves up a slice of cake at the 2016 Millpond Day festivities. Greenwood, who had served for three years as Superintendent of Merchants Millpond State Park, will be trading in the natural beauty of this coastal pond found in Gates County for the shifting sands of Jockey’s Ridge State Park. | Staff Photos by Cal Bryant

Joy Greenwood, who has served as Superintendent of Merchants Millpond State Park since 2014, has accepted a lateral move from the state agency overseeing North Carolina’s 29 parks to the Outer Banks where she will be in charge of Jockey’s Ridge State Park.

While she shared excitement over this new opportunity, and the chance to live close to her parents (natives of New Jersey before escaping to a more favorable temperate zone in Avon), Greenwood said the move is bittersweet.

“Merchants Millpond and Gates County has been a wonderful stop in life for our family,” Greenwood said. “Two of our three daughters (Lainey – 11 and Lily – 7) were born here, so this is all they have known until now. Even our oldest daughter, Molly (now 15), was just 18 months old when we moved here nearly 14 years ago, so it’s basically all she’s ever known as well.

“The thing I love the most here, other than the warm and friendly people, is Gates County’s great school system,” Greenwood said. “You know the teachers, you know the people working in administration….it’s a personal touch here, something that is lost in bigger areas of the state. Our girls have done wonderful in school here.”

Joy said she and her husband, Jay, the former Merchants Millpond Superintendent before a promotion to Regional Director of the state parks system, forged a great relationship with Gates County local government, other local state agencies, and local business owners.

“Those faces of leadership here do not change very often, that fact makes it easy to make and maintain strong relationships,” she stressed. “In a larger county, in a larger environment, you don’t have that same connection.”

“It’s so beautiful,” Greenwood noted. “There are so few coastal ponds left, so few habitats like this left in the state. Our family enjoys the outdoors, especially canoeing and kayaking, and hiking the trails. It’s been a special place for our family.”

Because of its immense size, Greenwood said Merchants Millpond could be busy with visitors, but it never felt overcrowded.

“That’s an issue found in some of our state parks in the more urban areas,” Greenwood noted of the volume of visitors. “There, they all walk the same paths. Here at Merchants, people don’t get that feeling. Our visitors love the fact that the campsites are located so far apart and separated by woods and water. They feel as though they’re isolated and on their own.”

Merchants Millpond boasts of six camping areas, including some deemed as “very primitive.” One of those is the Bennett’s Creek campground, which is a four and one-half mile paddle ride to gain access.

“This is a place where a visitor can come and be alone, one-on-one with nature and enjoy that quiet time,” Greenwood stressed. “Every day there is something different here.”

Due to its size and the number of trails and boardwalks that need to be constantly maintained, Greenwood said staying on top of that work is demanding.

“Lassiter Trail alone has 40 boardwalks; by the time we make our rounds in completing maintenance, you have to start all over again,” she said.

“Search and rescue is also demanding work here; I can’t begin to count the number of times I’ve had to go get someone out of the woods because they got lost,” Greenwood added. “The millpond is 760 acres just by itself (the entire park covers a shade under 3,500 acres) and it’s easy to get turned around and lose sense of direction. That’s why we found it extremely important to have a great working relationship with the emergency responders here in Gates County.”

Greenwood shared some great news about Merchants Millpond. It will increase in size thanks to a donation of property by the Byrd family, a tract off US 158 East that was formerly under an easement permitted by the owners.

“That family was among the original landowners of what is now the park and they’ve always been friends of the park system because they wanted to protect their property from development,” she said. “This latest donation gives us better access to Lassiter Swamp.”

While she hates to leave all this behind, Greenwood said her decision to accept the transfer boiled down to one major factor.

“One of the biggest things to happen to Jay and I came three years ago when he left Merchants Millpond for the Regional Director’s job is that left me alone here to raise a family while he worked weekdays away from home,” she noted. “I have a loving, supportive husband, but during the week I was a married, single parent because Jay had to travel so much in his new position.

“I had some wonderful friends to help out, but most of them worked just like I did,” she continued. “So one of the big factors in my decision to take the job at Jockey’s Ridge is that I have family there who can help out, to include my sister who manages the Ace Hardware store in Avon.”

Now, Greenwood turns her full focus to the start of a new chapter in life.

“With all the commercial and residential development going on along our coast, Jockey’s Ridge is becoming more and more like New York City’s version of Central Park, but rather on the Outer Banks,” she suggested. “Everything is built up around Jockey’s Ridge, so it’s very important to preserve that habitat and preserve and protect such a treasured landmark.

“Standing on top of that dune and taking in a sunset is nothing short of breathtaking,” Greenwood noted. “There are still small pockets of forest there that are also part of the park and need to remain protected.”

Jockey’s Ridge State Park originated in 1975 with 152 acres. Additional land purchases from the Nature Conservancy over the years has increased the park’s size to its current 420 acres.

“I’m one year shy of celebrating 20 years with the NC Parks system, so I’m thinking this will be my final destination,” Greenwood said. “This will be a great place to retire.”

Joy Greenwood is a 1993 graduate of East Carolina University with a degree in Biology. At that time, her parents lived in Wilson and had a vacation home in Avon, so she grew up with a love of that area and worked there during the summers in various jobs.

In 2001, she was promoted to Ranger II and assigned to Pettigrew State Park, located on the shore of Phelps Lake that sprawls across two counties – Washington and Tyrrell.

Another promotion and transfer came three years later – Advanced Ranger at Dismal Swamp State Park, located in Camden County off US 17. She remained there for 10 years, eventually gaining a promotion to Park Superintendent in 2006.

“That park did not open to the public until March of 2007, so I was involved early on in its development, to include the building of a Visitors Center,” she said. “When Jay left here in 2014, I came to Merchants as Park Superintendent.”

With her transfer to Jockey’s Ridge, Joy now has the distinction of working at all five state parks in the northeastern part of North Carolina.

JACKSON – May God bless and keep you always; may your wishes all come true; you’ve always done for others,... read more