Ready for ‘The Journey’ 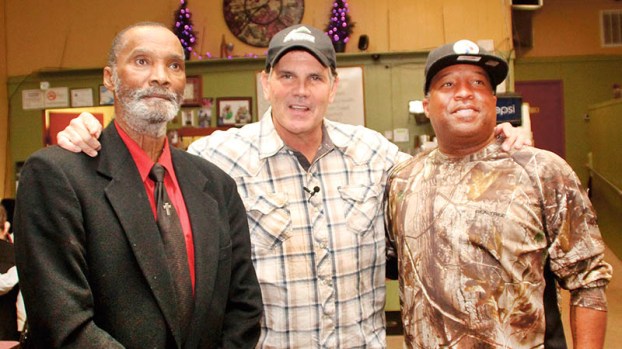 William Powell Jr. (right) is the person responsible for nominating his father, Buddy (left) to go on a hunting trip with Dave Watson (center). 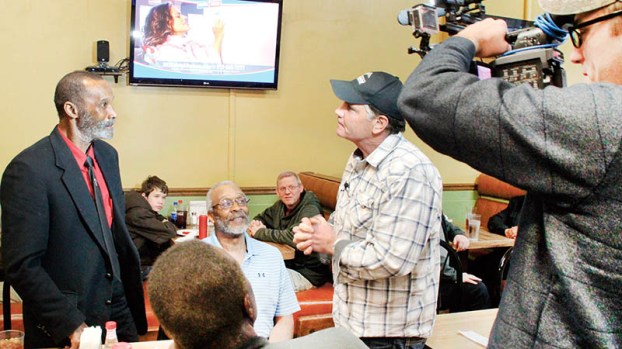 As the camera rolls, William “Buddy” Powell (left) receives the news from Dave Watson of The Outdoor Channel that he is the recipient of an all-expenses paid hunting trip to Oklahoma. | Staff Photos by Cal Bryant

What wasn’t written on the Nightly Specials chalkboard located behind the checkout register was an all expenses paid hunting trip to Oklahoma.

William “Buddy” Powell did not order that trip, but he earned one just the same.

In a complete surprise to Powell and the majority of others seated inside the cozy restaurant on Main Street, Dave Watson, host of “The Journey” on The Outdoor Channel, walked in the café’s front door around 5:30 p.m. and, with the lights of a TV cameraman on his heels, strolled up to a long table where Powell and several members of his family were seated.

“Mr. Buddy Powell,” said Watson, “will you join me on a trip to Oklahoma to hunt for wild boar?” 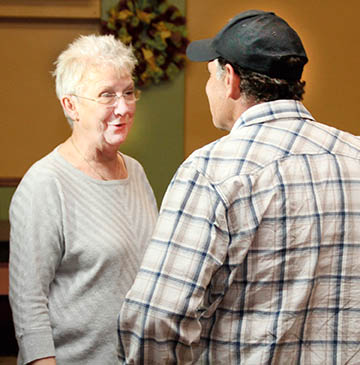 Barbara Outland, owner of the Grapevine Café in Woodland, greets national TV celebrity Dave Watson of The Outdoor Channel inside her restaurant on Friday night.

“Alright,” exclaimed Powell, with a look of utter disbelief etched on his well-worn face. “I’ll be happy to join you.”

Being the typical Southern gentleman, Powell gently grabbed the stranger by the arm and introduced Watson to members of his family seated at the table. He even went as far as to take Watson around to nearby tables where Woodland’s Mayor Kenneth Manuel and his wife were seated along with the town’s Police Chief John Ruppe.

“This whole thing surprised me; I had no idea what all the commotion was about when I first saw the lights of that (television) camera,” said Powell. “I thought someone was doing a show about this restaurant.

“When I found out that all that commotion was about me, my first reaction was what a blessed person I am,” Powell said humbly.

Powell said he is an avid watcher of The Outdoor Channel as well as “The Journey.”

“I’ve been hunting all my life, so something like this is right up my ally,” he said.

“I’ve hunted deer, bear, and turkey, but not a wild hog; I’m up for this,” Powell grinned when talking about his pending trip to the mid-West.

“I’ve got a hog cooker about as long as this table,” Powell chuckled. “I’m going to bring back one of those Oklahoma hogs and we’ll going to have us a good old pig roast when I get back.”

The entire affair was set-up by Powell’s son, William Jr. of Murfreesboro.

“Daddy loves watching The Outdoor Channel, especially that show,” William Jr. remarked, referencing The Journey. “The show accepts nominations for people to be taken on a hunting or fishing trip based on their special stories in life or for their volunteer work. I nominated my dad because he deserves this, he does so much to help others in this town, all without any recognition. I’m so happy he was chosen.”

For Watson, Friday’s stop in Woodland was his latest “pop-in” surprise.

He travels coast to coast knocking on the doors of ordinary people and surprising them with extra ordinary adventures. All free of charge. From elk hunting in New Mexico to deep sea fishing in Grand Cayman, “The Journey” is a place where dreams come true.

“The Journey is all about saying thank-you; we tell those we honor with these outdoor excursions that we’re grateful to them for performing acts of unselfishness,” said Watson during an interview with the Roanoke-Chowan News-Herald.

“So many go through life doing things for other people and they never receive their rightful recognition for that,” Watson continued. “Doing this television show over the past year has given me the opportunity to meet wonderful, caring, warm human beings. That gives me hope again that humanity in our nation is alive and well.”

“I found out that Buddy was a Vietnam vet; which in itself is worthy of being recognized,” Watson said. “William also told me that his dad would purchase shoes for children in need; went to basketball and football games to support kids when he knew their parents would be unable to attend; and he looks after elderly people in his neighborhood, especially when a storm is coming.

“William ended his nomination by saying his dad would be so happy to go on a hunting trip with me, but even if you do not choose him, I’m glad I had this opportunity to tell you about my dad,” Watson added. “I thought that was a nice sentiment.”

Within the next few weeks, “The Journey” will pay for Buddy Powell’s airfare to meet up with Watson in Oklahoma where the two will hunt for wild boar. The trip includes overnight lodging, all hunting permits, and food.

“I have as much fun as the winners,” smiled Watson. “The Journey is hard work, but it’s the most gratifying work I’ve ever done. There are a lot of hugs and handshakes, and even a few tears. Each and every episode is an emotional roller coaster as we say thank you to people who have helped others.”

Watson is a veteran TV producer with over 15 years on national TV. He’s created and produced successful series such as, Secrets of the Hunt, Bushnell Outdoors, Cabela’s Memories in the Field, and Track and Trail Adventures with Wally Dallenbach.

Watson lives in Phoenix, Arizona where he’s the single dad of four children.