RICHMOND, VA – Virginia Union University’s Tavon Mealy hit a jumper in the paint with nine ticks left on the clock to give the Panthers a 70-69 win over Chowan here Saturday night in CIAA Divisional play. 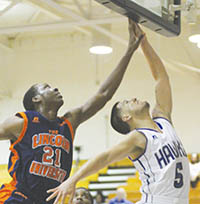 Chowan’s Andres Lopez (right, #5) gets his shot pinned on the glass in a recent game. Lopez had a team high 24 points thanks to seven three-pointers, but Virginia Union won 70-69 Saturday in Richmond on a late shot. | Photo by Qwi’wania Miller

Chowan trailed the Panthers 38-34 at the end of the first half but bounced back in the second half. Lopez hit a three-pointer at the 11:28 mark of the second half to spread the Hawks lead to ten points at 56-46. The Panthers chipped away at the Hawks lead over the last five minutes of play. At the two-and-a-half minute mark, VUU’s Everett Patterson drained a three ball to knot the game at 66-all. After a defensive stop, the Panthers added to their lead with under a minute to play at 68-66.

Lopez showed up big again after hitting another three-pointer with just 19 ticks left in the game, giving the Hawks a 69-68 lead.  But VUU answered on the ensuing possession when Mealy backed down the Chowan defenders and scored the game-winning jumper with :09 seconds left in the game.

The Hawks traveled to Livingstone College Monday for a make-up cross divisional game that was not completed by press time.